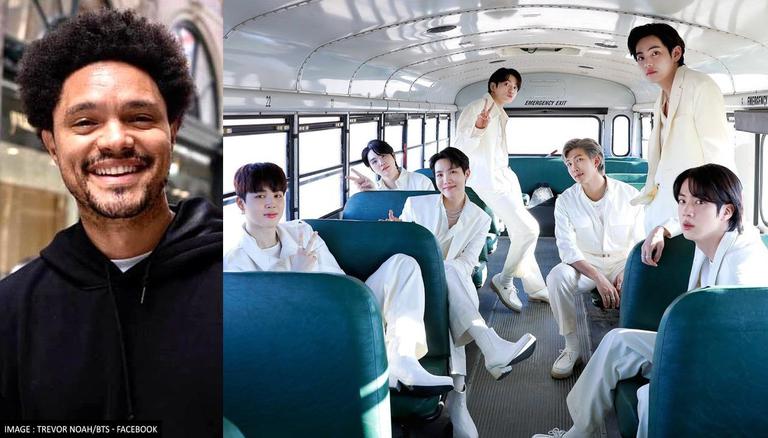 After it was announced that the band will be serving the mandatory services and shall be exempted to perform at national-level events, Trevor Noah poked fun at the global K-pop band. The group's eldest member Jin will be initiating the process by the month's end.

Late-night show host Trevor Noah's light-hearted jest on BTS has left the netizens in splits. Speaking on it, he said, "BTS in military service is great news for South Korea. Their army is basically unstoppable now. There is no army in the world that is going to take a shot at these guys. Are you kidding me? Everyone is a fan. Enemy soldiers will be like 'I just got stabbed by Jin. This is the last and the best day of my life.'"

According to BigHit MUSIC, other members of BTS-- RM, Suga, J-Hope, Jimin, V, and Jungkook -- plan to carry out their military service based on their own individual plans. The group, which debuted in 2013, is currently on a break as a unit with each of the members pursuing solo projects.

South Korea mandates that all able-bodied men must enlist to join the military for two years by the time they turn 30. Exceptions are granted to athletes who win medals in competitions like the Olympics.

Meanwhile, the popular comedian's journey on The Daily Show is coming to an end after a successful seven years run. During a taping of the Comedy Central satirical news program, Noah on Thursday announced that he is leaving the show, indicating that he wanted to dedicate more time to stand-up comedy. The 38-year-old comedian, who moved to the United States in 2011, had big shoes to fill when he took over in 2015 after the exit of longtime host Jon Stewart.