Jade Thirlwall has co-written one of the songs for TWICE's latest album Taste of Love. She took to Twitter to confirm the news. Read ahead to know more. 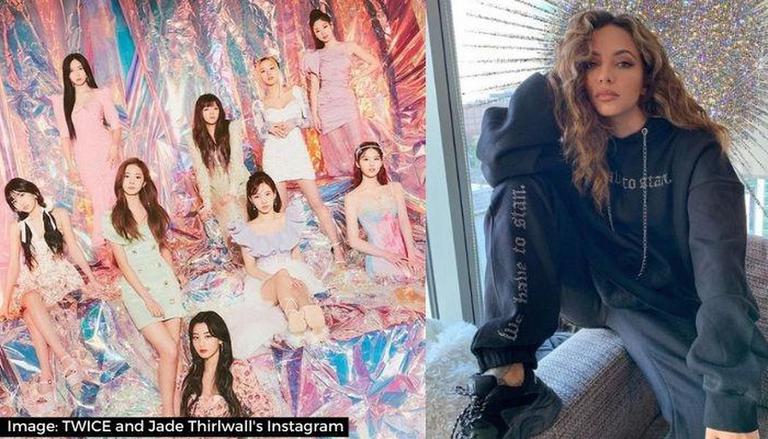 
Korean girl band TWICE is gearing up for the release of their upcoming mini-album Taste Of Love. This is the 10th mini-album of the band and their fans cannot wait for its release. But what has taken social media by storm is Little Mix’s Jade Thirlwall’s contribution to TWICE’s album. Jade has co-written a song titled First Time for TWICE and fans cannot keep calm over the news.

The news gained momentum when hawk-eyed fans noted that Little Mix’s Twitter account had liked a tweet about TWICE’s new album Taste Of Love that mentioned her as a co-writer. Neither Jade nor TWICE made an official comment about it. But finally last month, Jade announced that she had written the song First Time a few years ago. She also went on to write that she is happy that the song made its cut in TWICE’s new album. Her tweet read, “I wrote FIRST TIME a few years ago with @redtrianglepro (S/O to Frances too!)SparklesThe song is so special to me so I held onto it for the right moment, so this bop could fully GET it’s moment Raising hands I’m so excited and honoured that @JYPETWICE  have cut it for their new album.”

I wrote FIRST TIME a few years ago with @redtrianglepro (S/O to Frances too!)✨The song is so special to me so I held onto it for the right moment, so this bop could fully GET it’s moment 🙌🏽 I’m so excited and honoured that @JYPETWICE have cut it for their new album 😭🥰💖 Jade x https://t.co/QEXKdcqEUd

[INFO] @LittleMix has liked a tweet on info from @JYPETWICE’s upcoming mini album ‘Taste of Love’. One of their members, Jade Thirlwall, is credited as a writer / composer for their rumoured song ‘First Time’ along with Jihyo!

As soon as the tweet was shared, fans went berserk over it. One of them wrote that they cannot wait to hear this ‘masterpiece’ while another wrote that they need a full collaboration between the two. One of Little Mix’s ardent fans also went on to comment that since the song was written by Jade, they know it is going to be a ‘smashing hit’. Check out their tweets and reactions below.

Thank you very much, but we would like to get it in a full collab 👑@LittleMix x @JYPETWICE 🙏 @jypnation pic.twitter.com/TTlH939I6O

im so proud of you, i cant wait to hear this masterpiece 💗❤pic.twitter.com/dG9wIpUvYZ

Thank you Jade! I know this song is a bop ❤ I hope you guys will collab with TWICE soon!! Can't wait to here thiss song ❤✨

Thank you for giving your song to Twice! We can't wait to hear that song too.💖

TASTE OF LOVE IS COMING
TWICE IS COMING#TasteOfLove_Tracklist#TasteOfLove_AlbumTrailer#TWICE #트와이스 @JYPETWICEpic.twitter.com/ILkyfvMx3z

Just all these heavenly vocals together would be such a bop

since you co-composed it I know it’s going to be a smash hit pic.twitter.com/jwRBGIGCZx

This upcoming album comprises six tracks namely Alcohol-Free, First Time, Scandal, Conversation, Baby Blue Love and SOS. The physical edition will also include the English Version of their song Cry For Me. The first song, Alcohol-Free has been released on June 9, 2021, and has already garnered over 2 million views within two hours of its release. The track features TWICE’s members expressing what it feels like to fall in love. They croon about getting drunk in love when they haven’t even had a drink. The music video is very colourful and pleasant to watch.