From BTS' Butter topping Billboard charts to TXT's The Chaos Chapter, K-pop fans had a big and busy week. Take a look at the weekly roundup. 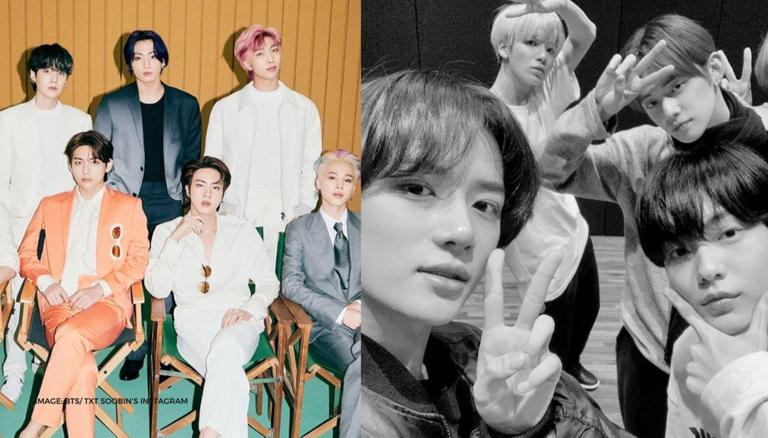 
Korean pop culture continues to ride the waves and dominate the global music industry this week too. The industry, which exploded in the last few years with its catchy songs and pleasing visuals, has yet again made history thanks to its driving boy band BTS. From BTS' latest record to update on EXO's special album, the K-pop world had a big busy week. Take a look at what happened in a weekly roundup below.

On June 1, Billboard announced that BTS' new track Butter has topped its Billboard Hot 100 songs chart. The boy band’s latest English music video replaced Olivia Rodrigo's Good 4 U, which held the spot last week. BTS members passed on the big news through their official Twitter handle and thanked their fans for the feat. The outlet also informed that this became any act’s “quickest accumulation of four leaders since Justin Timberlake a decade and a half ago". The track became BTS' fourth Hot 100 No.1, in nine months.

Ever since its release on May 21, 2021, BTS’ Butter has been breaking records. The track drew 32.2 million US streams and sold over 242,800 downloads in its first week, setting a new high. The song's high sales also mark the highest in a week overtaking BTS' first English track Dynamite, which opened with 3,00,000 sales. BTS' butter has been breaking records on YouTube, Spotify as well as Guinness World Records. On Spotify, the song garnered over 11 million global streams in just one day, which also made it the most-streamed Spotify track in its first 24 hours.

South Korean boy band Tomorrow X Together, better known as TXT, dropped their second full-length album titled The Chaos Chapter: Freeze on May 31, 2021. TXT’s The Chaos Chapter was well-received among fans. The band which always aimed to share relatable stories to youth did the same with the album amidst the global pandemic. While I Know I Love You featuring Seori came out as a fan favourite, Magic came as the surprise package as it became TXT's first English track. Anti-Romantic, 0x1=Love Song, Minor Evil, Balance Game, No Rules, Dear Sputnik, and Frost, are the other tracks in the album.

Kingdom: Legendary War 2021, which began airing on April 1, 2021, came to a stunning end on June 3, as Stray Kids, took the crown of the Final King. After weeks of intense performances, the group took the trophy home with their last performance, Wolfgang. Stray Kids, who are known for their noise genre music performances stunned the audience with one stellar performance after another. The group beat bands like SF9, iKON, ATEEZ, BTOT and THE BOYZ to win the title, accumulating a total of 1,303,798 votes.

Seems like BTS isn’t the only K-pop group setting records as NCT Dream made history this week. NCT's hot sauce took to Twitter to announce that their latest album, Hot Sauce became one of the best-selling South Korean albums of all time. NCT’s hot sauce, which arrived on May 10 has sold over 2 million copies, as revealed by the band.

On June 3, 2021, EXO released a new teaser of its upcoming album, Don't Fight The Feeling. The K-pop band which has also been releasing individual teaser images released a 26-second-long character clip of its artist Baekhyun. The special album had grabbed the fan’s attention with the announcement featuring Chinese member, Lay Zhang. The album marks Zhang's return since his hiatus from the group in 2016. Zhang will be joining EXO's Baekhyun, Chanyeol, Kai, Sehun, Baekhyun, D.O., and Xiumin.