The biggest K-pop band, BTS is back with another edition of their popular reality series 'In The Soop'. Take a look at their preview photos. 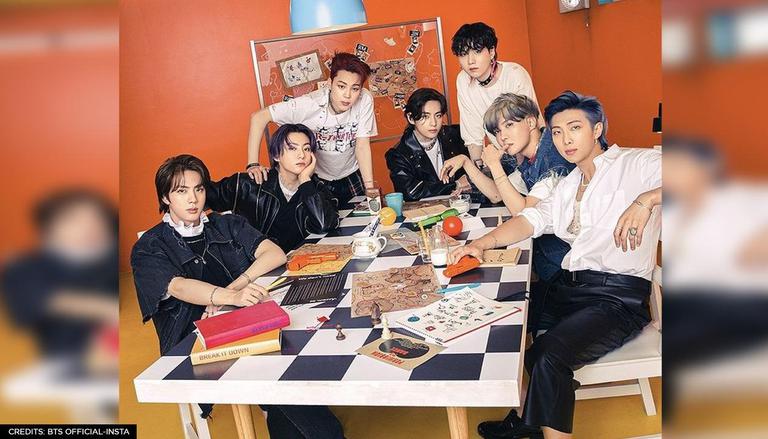 
Dubbed as one of the biggest bands in the world, BTS is known for its reality series In The Soop. The all-boy band is back with another edition of the show with a new and refreshed aura. The official handle of the reality series dropped the preview pictures of the BTS members and following the trajectory of all the BTS content, these previews photos took no time to go viral on social media. Take a look at the band's new and relaxed looks for the fun series.

Taking to their official Twitter handle, In The Soop released the preview photos of all the seven members of the band, namely Jin, Suga, J-Hope, RM, Jimin, V, and Jungkook. The leader of the band, Rap Monster, opted for a white shirt with short black pants paired with black-rimmed glasses, while the oldest member Jin was seen affectionately cooking for his younger teammates while wearing the signature purple hoodie.

Lead rapper Suga opted for a black graphic tee and flaunted his blond hair as J Hope followed the suit by wearing a black shirt and a beanie over his head. The second set of pictures showed the younger members of the band engaged in their work. Jimin and V sported a black and white shirt, respectively, and were seen sitting on a sofa. On the other hand, the most popular and youngest member of BTS, Jungkook, was candidly captured holding a stack of pasta in the kitchen.

BTS ARMY's reaction to BTS' 'In The Soop'

BTS ARMY was quick to circulate the preview pictures on the internet with many spamming the feed with compliments for BTS' casual looks. Many shared Jungkook's photos and wrote captions with the likes of, 'Literally a baby', 'Ohmygosh he is soo cute', and 'I’m already head over heels for barefaced bangtan'. Many complimented other members of the band as one of them called Jin a 'Boyfriend material' while another user remarked on some of the member's new hairstyles. They wrote, 'So platinum Hosoek, blonde Yoongi, puddle Taehyung and Jungkook's tattoos???? How are we holding up??[sic]'. In The Soop is expected to release next month.