What Tattoo Did Harry Styles Get Inked On 'The Late Late Show'? Find Out Below

Harry Styles ended up loosing the tattoo roulette on Corden's 'The Late Late Show'. Harry's ink made headlines since it saved Niall from getting his 1st tattoo. 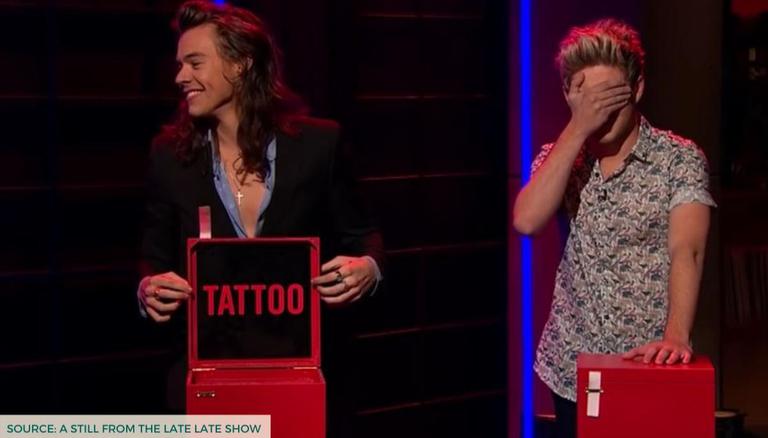 Image Credit: A still from The Late Late Show


Harry Styles has plenty of interesting tattoos on his body. While some of them are quite silly, one tattoo lead to several headlines. During their last appearance as a band on a late-night talk show, Harry Styles, Liam Payne, Niall Horan, and Louis Tomlinson, all played Tattoo Roulette on The Late Late Show. Harry Styles ended up losing the game and eventually got a tattoo while on air. So, what tattoo did Harry Styles ink on himself on The Late Late Show? Find out below.

What tattoo did Harry get on Corden’s show?

One Direction has been close to late-night talk show host, comedian, and actor James Corden for more than a decade. So, when the band was embarking on a hiatus, they marked their final appearance on his show as a band. During their appearance, the band discussed a lot of things, right from their hiatus to stupid tattoos.

Like many other hosts, James Corden also plays plenty of games with his guests. During One Direction’s final appearance on the show, the four members and James Corden played a game of tattoo roulette. The rules were simple, all five of them had to pick a choose a red box one after the other. On the inside of four of these boxes the word, “Safe” was written and in one of them “tattoo” was written.

As the game continued, it came down to the final two boxes and only Niall Horan and Harry Styles were left. One of their boxes had the word, “tattoo” on them. Harry Styles opened his box before Niall and Styles ended up losing the game. But this turned out to be good news for him Niall and he heartily celebrated the in. Eventually, Harry Styles got the words, “Late Late” tattooed on his left arm and in the end, even showed it off to the audience. Watch this complete ordeal below.

Image Credit: A still from The Late Late Show