Maharashtra government on Tuesday announced that films, TV serials, and advertisement shoots will be halted in the state from Wednesday evening as part of the fresh guidelines to curb coronavirus cases.

The coordination committee of the media and entertainment industry, meanwhile, on Thursday has written to the Chief Minister of Maharashtra requesting them to allow a few things during the ongoing curfew. The committee comprises film bodies like IMPPA, IFTDA, FWICE, AND CINTAA.

From allowing post-production work to requesting vaccinations for daily wage earners on the TV/film set, the committee has listed some pointers in the letter that is also CC-ed to Rajesh Tope, Health Minister of the state. 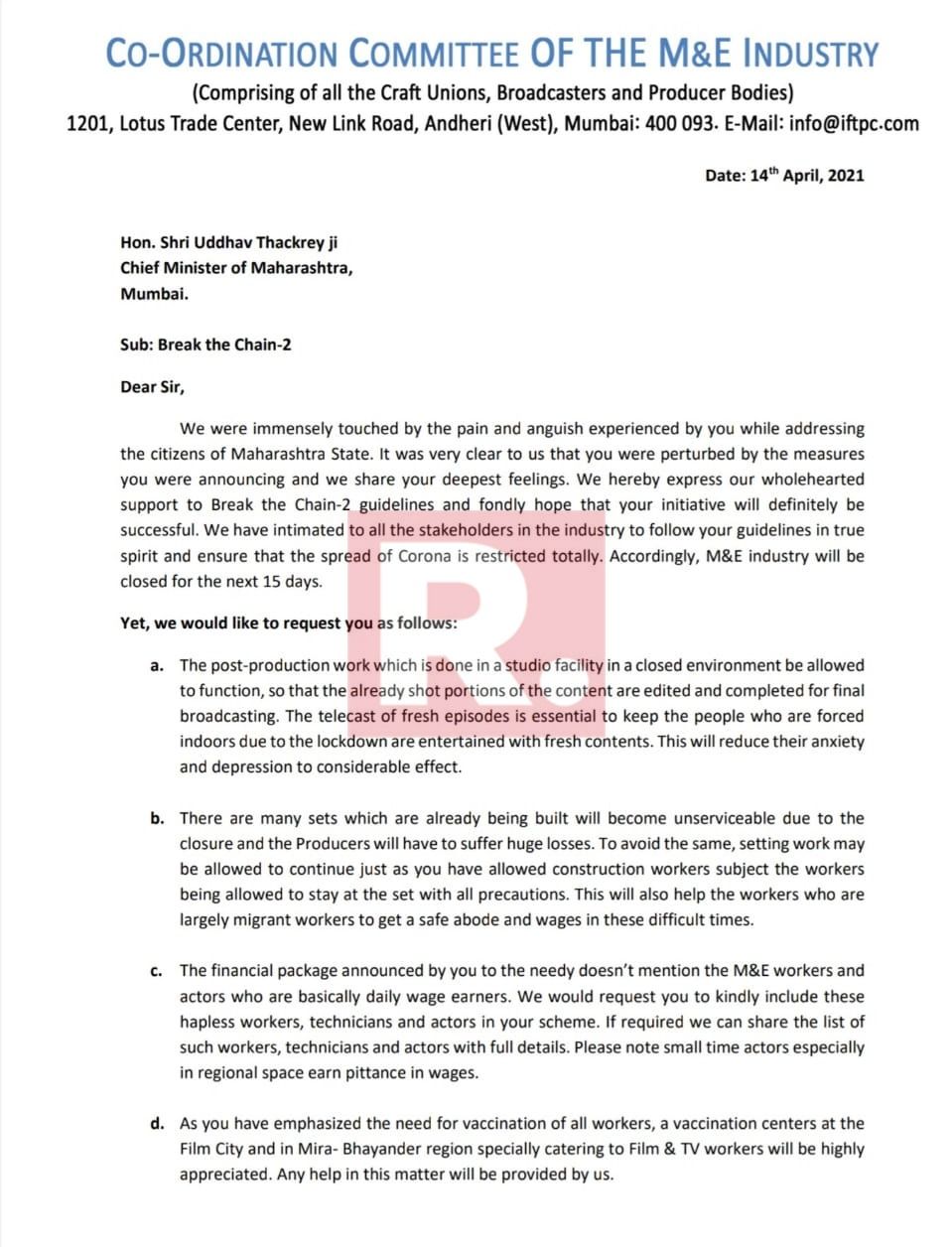 Under the 'Break The Chain' order announced by Chief Minister Uddhav Thackeray, the current order has put a stop to shootings that were underway with precautions like mandatory frequent testing and avoiding scenes with large crowds. This will go on till to 7 AM on May 1.

BN Tiwari, President of the Federation of Western India Cine Employees (FWICE) said the state government's decision has come as a "huge shock".

"We should have been allowed to work. Films and TV shoots were underway with complete precautions, adhering to all government guidelines. But the complete halt of shootings is a setback. We would take utmost precaution, figure out new, stricter guidelines but if the work is stopped, it'll be a huge loss for us," Tiwari told PTI.

Actor-producer JD Majethia, Chairman TV & Web wing of Indian Films & TV Producers Council (IFTPC) said the body stands with the order but would request CM Thackeray to reconsider the decision. Majethia said film and TV artists were no less than "frontline workers" who are currently working hard to entertain the audience in grim times.

"Right now, people are low, frustrated, and at home. They would need some entertainment. We are entertaining them daily and hence are frontline workers too. We should be listed under essential service. If we can create a bio bubble and shoot under a controlled environment, we should be allowed to, like we were given permission last year. In a day or two, we will request the CM for this. But as of now, we stand by the state, understand and respect what they have said," Majethia added.

Last year in March, to contain the pandemic, film bodies in India including FWICE and Indian Film & Television Directors' Association (IFTDA) had decided to put shootings of films, TV shows, and web series on hold.

In May 2020, the Maharashtra government allowed the shooting of films, TV serials, and web series with safety measures to contain the spread of the coronavirus.

Maharashtra on Tuesday reported 60,212 fresh coronavirus positive cases, taking the tally to 35,19,208 while 281 fatalities pushed the toll to 58,526, the state health department said.