India's Harnaaz Sandhu has been crowned the winner of Miss Universe 2021 in Israel. Harnaaz Sandhu brought back the title to the country after 21 years. 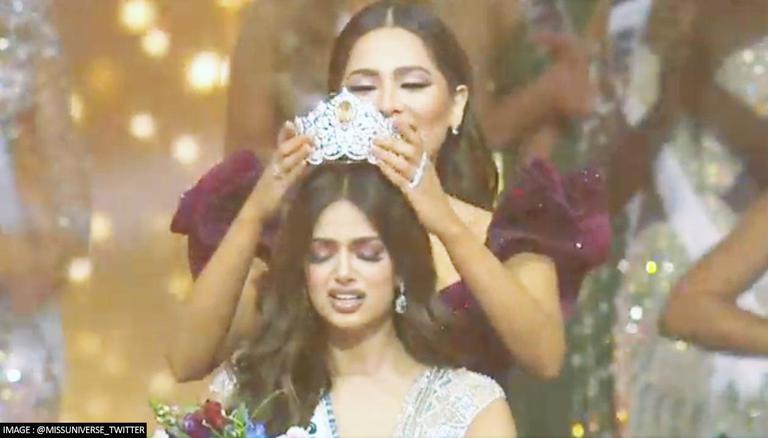 
India's Harnaaz Sandhu has been crowned the winner of Miss Universe 2021, which was being held in Eilat, Israel. Harnaaz brought back the title to the country after 21 years and became the third Indian woman to win the beauty pageant. Here is her emotional winning moment.

Harnaaz Sandhu entered the finals and competed against the contestants of Paraguay and South Africa. Harnaaz wore a shimmery gown with silver accents and a mermaid shaped bottom. Her gown also had a middle slit that went up to her knees. She accessorised her glamorous look with a pair of earrings and a ring. Harnaaz held the hands of the contestant from Paraguay, moments before the announcement. As soon as host Steve Harvey announced her as the winner of the pageant, she broke into tears. Harnaaz was then presented with a bouquet of flowers and the prestigious crown.

Who is Harnaaz Sandhu?

Indian model Harnaaz Sandhu hails from Chandigarh, Punjab. She completed her schooling in her home state and pursued a career in modelling. Harnaaz Sandhu is the newest holder of the Miss Universe India 2021 title, due to which she went on to represent the country at the 70th edition of Miss Universe 2021. The 21-year-old has multiple pageant titles to her name and has starred in some Punjabi films, including Yaara Diyan Poo Baran and Bai Ji Kuttange.

These looks are everything! #MISSUNIVERSE

The 70th MISS UNIVERSE Competition is airing LIVE around the world from Eilat, Israel on @foxtv pic.twitter.com/0MtWAuVaCZ

As per her Instagram handle, the Harnaaz enjoys singing, acting, yoga, swimming, dancing, cooking and horse riding. Before winning the Miss Universe India 2021 title, she won Miss Max Emerging Star India in 2018. While she did not win the Femina Miss India 219 by 11 spots, she later went on to represent Chandigarh at Miss Diva 2021 in September. Her win last Miss Diva made her participate in Miss Universe India 2021.

WE RECOMMEND
Harnaaz Sandhu crowned Miss Universe 2021, title comes back to India after 21 years
IMD predicts light to moderate rainfall in many places across India for next 3-4 days
India to launch its first space station by 2030; soon after manned 'Gaganyaan' mission
Real Madrid vs Atletico Madrid live stream: How to watch Madrid Derby in India, US and UK?
PSG Vs AS Monaco Live Stream: How to watch Ligue 1 match in India, US And UK?
Listen to the latest songs, only on JioSaavn.com