Hospital Playlist is one of the top-rating shows in South Korea with record-breaking viewership marked in its first two episodes. Watch the BTS video here. 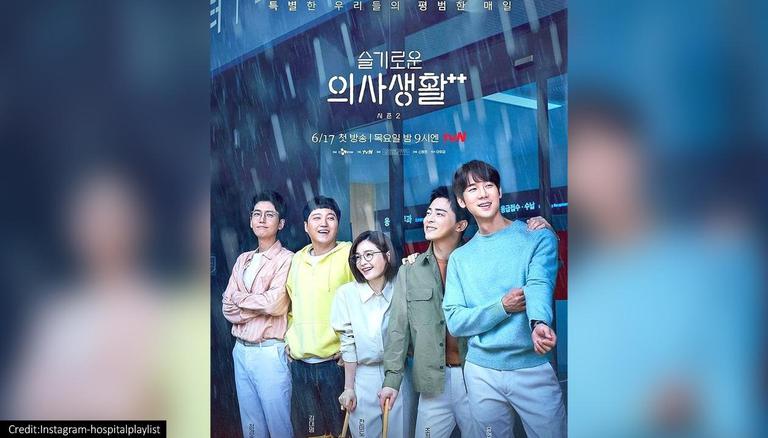 
South Korea's top rating show Hospital Playlist is back with another season after winning hearts in the first season across the globe. With record-breaking viewership with its first two episodes in tvN's history, the drama's popularity is showing no signs of slowing down on the small screen. Owing to its fresh storyline and lighthearted content, netizens attributed the off-screen chemistry of the cast as the main reason for its success.

Taking to their official Instagram handle, the South Korean network tvN shared a fun BTS video of the sixth episode of the second season. The plot of the movie depicts a tale of five best friends who also happen to be talented doctors in the same hospital. Portrayed by Jo Jung Suk, Yoo Yeon Seok, Jung Kyung Ho, Jeon Mi Do and Kim Dae Myung, netizens could not help but swoon over their friendship on-screen. Recently, tvN took to their Instagram to share a video that flaunted the off-screen chemistry of the cast.

The BTS showed the making of the sixth episode of the second season. Actors Jo Jung Suk and Yoo Yeon Seok engage in playful banter as per the scene and break off after getting a 'cut' signal from the director. Yoo Yeon Suk was seen apologizing to Jung Suk for pulling his hair to which the latter remarked saying 'I'm going to become Wolverine'. The five actors monitored their scene together and burst out laughing.

In the next clip, Jung Kyung Ho played his guitar and broke a string off. While the actors joked about the accident, Yoo Yeon Seok playfully accused Kyung Ho of breaking the string on purpose. Kim Dae Myung chimed in saying he should also destroy his Piano and told Yeon Seok to destroy his guitar as well. In another clip, fans got to see a glimpse of Jung Suk and Yeon Seok's real-life friendship as they posed for a selfie together while cracking jokes.

While the clips perfectly flaunted the off-screen chemistry between the actors, Yeon Suk and Kyung Ho had a hard time getting into sync with one another. In a scene where Kyung Ho has to catch a banana thrown his way by Yeon Suk, the duo had multiple retakes. Eventually, they succeeded and celebrated with a high five.

Released on July 22, the viewership of the sixth episode, according to Nielsen Media Research, was 3.573 higher than the previous season's tally of 3.082.

READ | Nupur Sanon opens up about her first heartbreak; calls it 'filmy drama'