After inaugurating the India Pavillion at the Cannes 2022, Anurag Thakur paid a floral tribute to the first king of the Sikh Empire, Maharaja Ranjit Singh. 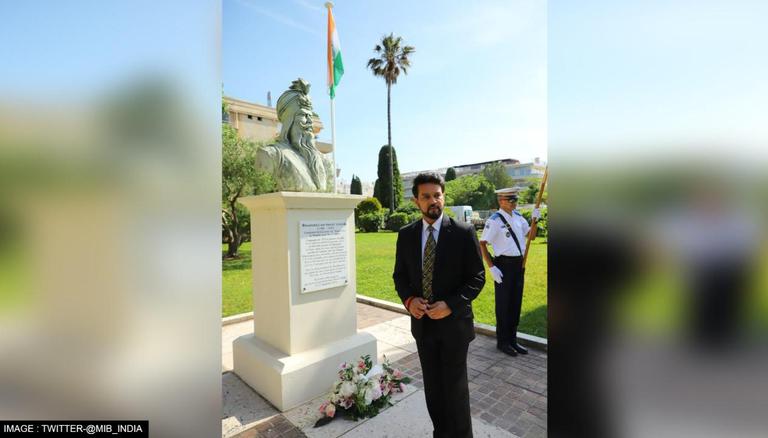 
Union Minister for Information and Broadcasting, Youth Affairs & Sports, Anurag Thakur, is representing India at the 75th Cannes Film Festival. After inaugurating the India Pavillion at the event in the midst of stars from the entertainment industry, the Union Minister visited the Allard Square at Saint Tropez, a coastal town in France. He also paid a floral tribute to the first king of the Sikh Empire, Maharaja Ranjit Singh.

The Ministry of Information and Broadcasting, taking to Twitter, posted a series of pictures from the BJP leader's visit and wrote, "Sh. @ianuragthakur visits the Allard Square at Saint-Tropez & pays floral tribute at the busts of: Maharaja Ranjit Singh (first Maharaja of Sikh empire), Jean-François Allard (General in Maharaja Ranjit Singh's army) & his spouse Princess Bannu Pan Deï of Chamba."

Sh. @ianuragthakur visits the Allard Square at Saint-Tropez & pays floral tribute at the busts of:

In the pictures, the 47-year-old Minister can be seen offering a bouquet to Maharaja Ranjit Singh's statue located in Saint Tropez. He also posed for the pictures as he also remembered the brave king.

The Minister, at Cannes 2022, added that in the case of foreign films that will be shot in India, an additional bonus will be provided with a cap of $65,000 for employing 15 per cent or more of their manpower in India.

The poster saw a beautiful peacock with shares of blue and green, against a pastel pink background. The tagline of the poster read, "Celebrate the joy of cinema".

READ | Cannes 2022: Pooja Hegde goes all-white and breezy for her Day 2 at the French Riviera

On the opening day, 10 Indian celebrities namely- musician AR Rahman, actors R. Madhavan, Deepika Padukone, Nawazuddin Siddiqui and Tamannaah Bhatia, filmmaker Shekhar Kapur, two-time Grammy award winner Ricky Kej, CBFC chief Prasoon Joshi, folk singer Mame Khan and the Union Minister Thakur graced the Cannes Red Carpet. Padukone, who has been a regular at Cannes for the past few years, made her debut as one of the eight-member jury board at the film festival.

India has also been named as the first-ever official 'country of honour' at Marche du Film, the business counterpart of the Cannes Film Festival. India is also a ‘country of honour’ at the 'Cannes Next', under which five new startups would be given an opportunity to pitch to the audio-visual industry.