K-Dramas To Keep An Eye Out This September 2021: From Kim Min-jae To Kim Go-eun's Comeback

The boom of K drama has seen significant growth from the past year with more and more OTT platforms producing original series. Read more. 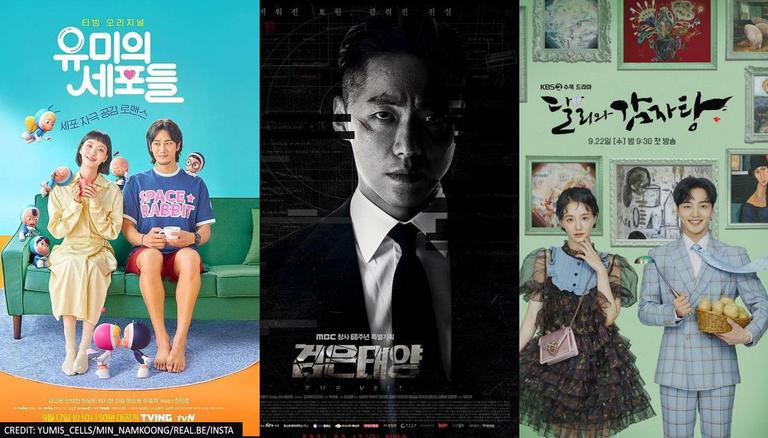 
The boom of K drama has seen significant growth in the past year with the widespread popularity of East Asian content growing internationally. Along with new Korean dramas introducing fresh and revamped plots, leading OTT platforms have been broadening their horizons by producing original South Korean series. Take a look at the new Korean dramas being released in the month of September this year. From popular actors making a comeback with dramas introducing new faces, here are some of the best K dramas to watch this month.

K dramas to watch in September 2021

Presented by TVN, Yumi's Cells marks the highly awaited comeback of Goblin actor Kim Go‑eun along with Ahn Bo‑hyun and Park Jin‑young. Directed by Lee Sang-yeob, the series is an adaptation of  Lee Dong-gun’s hit webtoon of the same name. billed as the first K drama to introduce mix live-action footage and 3D animation, the plot of the drama follows the life of Yu-Mi who expresses her feelings through the various cells which represent her different emotions. Yumi's Cells be released on September 17.

2. Dali and the Cocky Prince

As hinted from the title, the drama follows the story of Dali and a rich cocky owner of a restaurant franchise. Played by Park Gyu‑young and Kim Min‑jae, respectively, the former will be seen acting like a cocky man lacking formal education but skilled at making money. On the other hand, Gyu-young will play art gallery researcher with a talent for knowing multiple languages. The series will release on September 22.

The fiery look of Lee Hanee garnered attention upon the release of the teaser of One The Woman. Playing the role of Jo Yeon-joo, a corrupt prosecutor, the twist in the event comes after she loses her memory during an ongoing case. Lee Won‑keun, Jin Seo‑yeon and Lee Sang‑yoon will also be seen in the series. The comedy-drama will be released on September 17.

Featuring Han Ye-ri, Uhm Tae-goo and Yoo Jae-myung, Hometown is set in 1999 is billed as a thriller mystery. Directed by Park Hyun-suk, the series follows the story of Yoo who investigated a case that seems to have a link to a terrorist attack that happened 10 years ago where he lost his wife. The series will be released on September 22.

Marking his highly-awaited comeback, Min Namkoong will be seen in the role of a highly respected agent from the National Intelligence Service who disappeared for a year. The plot of the series takes a wild turn when he returns to confront the traitor. Featuring alongside Kim Ji Eun, Park Ha‑sun and Gim Jong‑tae, Min Namkoong's The Veil will premiere on September 17.

Presented by JTBC on their 10th anniversary, Jeon Do-yeon and Ryu Jun-yeol starrer Lost will tell an endearing story of two strangers at different stages of their lives sharing the same feeling of hopelessness. The drama is directed by Jin-ho. IT is scheduled to premiere on September 4.