From 'KGF Chapter 2' to Stranger Things S4; here is a list of web series and movies that are all set to stream on the OTT platforms in the upcoming week of May. 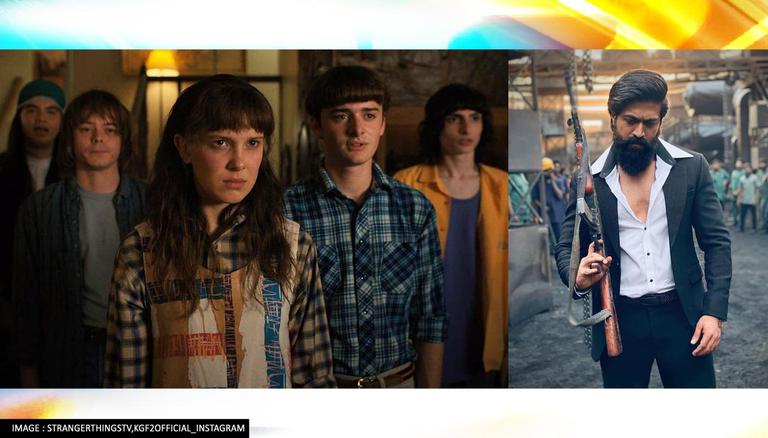 
Digital platforms are witnessing unprecedented growth owing to the onset of the COVID-19 pandemic after which audiences prefer consuming content at home via OTT devices rather than moving out. With theatres and other public venues shut down, people were forced to stay indoors and entertain themselves through different media types and over-the-top (OTT) services. Despite the slow return to normal, the growth of OTT platforms like Netflix, Amazon Prime Video, Zee5, Disney+Hotstar and more will continue for the years to come.

From KGF Chapter 2 to Stranger Things S4; here is a list of web series and movies that are all set to stream on the OTT platforms in the upcoming week of May.

Netflix's popular web series Stranger Things has already been renewed for the fourth season with fans and followers eagerly waiting for the release of the forthcoming season of the highly-anticipated show. The Volume One of the series will release on May 27th, 2022, while Volume Two will release five weeks later on July 1st.

READ | 'The Kashmir Files' 'Stranger Things S4' to 'Thar': Everything releasing on OTT in May

KGF 2 has already arrived on Amazon Prime with a pay per view model. The film can be rented on the OTT platform for Rs 199. Post the release in theatres, the Yash starrer has smashed several records in the Hindi belt as it has entered the Rs 200 crore club within 5 days of its release. Overall, KGF 2 has also reportedly crossed the Rs 400-crore club across India. The magnum opus also stars Raveena Tandon and Sanjay Dutt in pivotal roles.

Star Wars mini-series titled 'Obi-Wan Kenobi' has been one of the much-awaited releases online and was earlier meant to premiere on May 25 on Disney+. But, now the premiere of the highly anticipated show will take place on May 27, 2022.

Releasing on 23rd May, Toolsidas Junior marks the last film of veteran actor Rajiv Kapoor, which traces the bond between a father and son against the backdrop of the underrated game of Snooker. Toolsidas Junior offers the ideal collective family viewing experience on Netflix, catering to all audiences.