Mico Palanca, popular for his work in the TV industry passed away on Dec 9. Read more to know about the Palnca’s views on their brother’s sudden demise.

Television actor, Mico Palanca who is popular for his outstanding work in shows likeTabing Ilog and It Might Be You has recently passed away. The Filipino actor died at the age of 41 on December 9. The actor’s sudden death has shocked the whole world and the cause of his death has still not been verified. Erika Hocson, Micos’ sister recently took to her Instagram to share the sad news with her brothers’ fans and loved ones. Read more to know about the Palnca’s views on their beloved brother’s sudden demise. 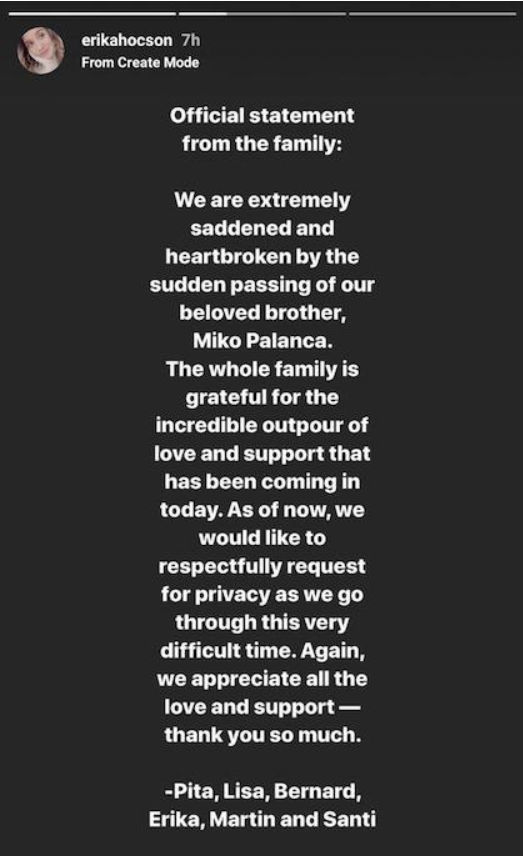 Official Statement made by the Palancas

Erika shared a story on her social media which stated, As of now, the Plancas would like to respectfully request for privacy as they go through that very difficult phase. She appreciated all the love and support they have received and thanked the people for their endless support and love. Reportedly, the actor’s body was found in a residential area in San Juan and the investigation to find the real cause of Mico’s death is still ongoing. The Film Academy of the Philippines posted a formal condolence message in order to pay a tribute for the famous star. A huge number of fans will be missing the great performer and his presence on the television shows. Read more about some fans outpouring some love and support for Mico Palanca.

Film Academy of the Philippines

😭🙏 praying for you mico. Thank God i was able to work with you. Kind, gentleman and very humble. #rip #micopalanca

And just like that, another brilliant actor left this earth. RIP #MicoPalanca. Thank you for sharing us your talents and making us kilig. Suicide is not a joke, we have to fight the demon inside us to survive. Talk with God, your family and friends. 😔

Whatever the reason is, are of your death, you will never be forgotten #MicoPalanca 😭😭😭 You're one of the handsome faces in the Showbiz industry I've loved before. Can't believe this yet! 💔 pic.twitter.com/kSDy5qsQeH

😭🙏 praying for you mico. Thank God i was able to work with you. Kind, gentleman and very humble. #rip #micopalanca