What Happened To Prateek Khatri? Everything You Need To Know About The Social Media Star

What happened to Prateek Khatri? Know everything about the accident that claimed the social media star's life. Read further to know more details about it.

Prateek Khatri passes away in a car accident, fans mourn his demise

Several social media stars, who were part of his group, paid their respects to Prateek Khatri. They mentioned how heartbroken they were by the news and spoke of the good deeds the man had done. Famous social media stars like Bhavika Motwani and Aashika Bhatia paid their respects to the departed soul. Aashika Bhatia especially mentioned in her post that she found it really hard to believe that Prateek Khatri left this world. Aamir Siddique too wrote a heartfelt post for Prateek Khatri. The star uploaded his condolences on Instagram stories and mentioned how disturbed he is by the death of Prateek.

How did Prateek Khatri die?

It was reported by the portal that Prateek Khatri died due to a fatal car accident. He breathed his last on October 6, Tuesday night. Thus Aamir Siddique in his condolence post specially mentioned the driving safety norms one must follow. He also advised the younger generation to keep themselves safe while driving and avoid rash decisions. Fans of Prateek Khatri were shaken by the death of their favourite star and wrote several condolence messages in the comments section of his last post. People have been paying their respects to him since his demise on his social media handles. 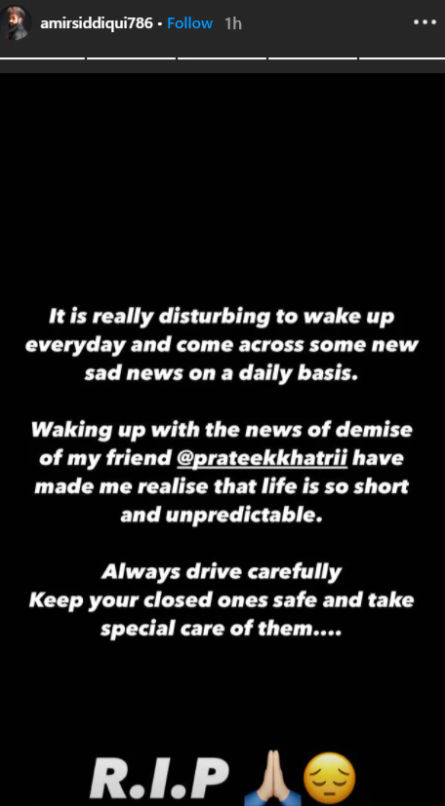