Mukesh Ambani's son Anant Ambani and Radhika Merchant had a traditional roka ceremony at the Shrinathji Temple in Nathdwara, Rajasthan. 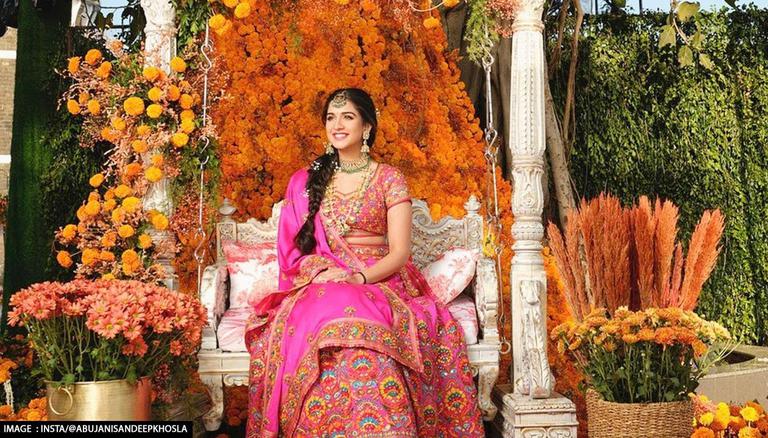 
Radhika Merchant is all set to tie the knot with Mukesh Ambani's son Anant Ambani. Ahead of their wedding, Radhika's pictures and videos from her mehendi ceremony have gained everyone's attention.

In a video that went viral from the ceremony on Tuesday (January 17), Radhika can be seen dancing to Alia Bhatt's song 'Ghar More Pardesiya'.

For her daytime mehendi ceremony, the bride-to-be Radhika Merchant looked drop-dead gorgeous in the heavily embroidered floral-themed Fuschia pink lehenga. For her makeup, she chose a rosy-glow theme with a generous touch of pink-toned blush. She also highlighted her well-defined cheekbones and opted for a deep pink lip shade.

She accessorised her look with polki-choker necklace teamed up with matching earrings and maangtika. Furthermore, she completed her look by opting for a fish-tail braid featuring ornamental white flowers along the length. Her henna-clad hands featured peacock and flower motifs.

Check out  the pictures:

About Radhika and Anant Ambani

After returning from Rajsthan, Mukesh Ambani threw a grand bash for the couple. Anant and Radhika received a warm welcome in the city. Several Bollywood celebrities attended the ceremony. Flower show, dhol-nagada and fireworks at Worli sea-link were some of the highlights of the event.

Ranbir Kapoor, Alia Bhatt, Ayan Mukherji among others were spotted at the event. Their relationship was kept private until her video dancing with Shloka Mehta and Isha Ambani at the latter's engagement went viral in 2018.

After that, she has been spotted at every family function. Anant reportedly proposed to Radhika in Nathdwara, Rajasthan.