Samantha Akkineni and Naga Chaitanya Akkineni have been among the power couples in the South film industry and arguably the most popular among the current lot.

Samantha Akkineni and Naga Chaitanya Akkineni have been among the power couples in the South film industry and arguably the most popular among the current lot. Recently the Tollywood actress took to the photo-sharing app, Instagram and posted a candid picture with her husband, and it is too beautiful for words!

READ: ‘It Took Us Eight Years To Be At The Same Point’: Samantha Akkineni Opens Up On Her Relationship With Naga Chaitanya

In the picture, the duo can be seen sharing a laugh, while Samantha looks lovingly at her husband, Chaitanya.

A post shared by Samantha Akkineni (@samantharuthprabhuoffl) on Mar 18, 2019 at 4:59am PDT

Ever since the picture has been posted, it has been going viral on the internet, with netizens praising the picture for how beautiful it is, and how loving the pair look together!

Read their reactions below: 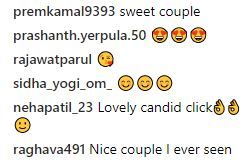 Meanwhile, in a recent appearance on a chat show, Samantha opened up on the relationship with her husband and co-star of numerous movies. The ‘Eega’ star stated that it took them eight years to be at the same point as there were times she ‘liked him’, but he was not in the 'same space'. Moreover, she added there were times when both were ready but external factors played spoilsport before eventually, everything fell into place.

A post shared by Samantha Akkineni (@samantharuthprabhuoffl) on Oct 7, 2017 at 8:55am PDT

Merry Christmas from my family to yours ❤️ God has been kind ..going into the new year with a smile on our faces and ready to win battles together .. as long as we have each other every day is going to be a better day .. I wish you and your family peace and joy and understanding and love this Christmas . God bless all of you ❤️ #merrychristmas #happyholidays

A post shared by Samantha Akkineni (@samantharuthprabhuoffl) on Dec 24, 2018 at 9:42pm PST

The actress is currently basking in the success of several blockbuster hits, namely 'Mahanati', 'UTurn', 'Seema Raja', 'Irumbu Thirai' and 'Rangasthalam'. Samantha Ruth Prabhu, now known as Samantha Akkineni, is one of the most prominent stars down South and has been having a phenomenal year so far personally and professionally.

PEOPLE HAVE PLEDGED SO FAR
Manisha Koirala and Shirley Setia's first song of 'Maska' out, watch video
CINTAA requests govt for recognition as industry, celebs say 'change our lives for better'
Review: ‘Driving While Black’ opens road to civil rights
Is 'Trance' inspired by Osho? Writer of the Fahadh Faasil starrer clears the air
Is Nick Groff back on 'Ghost Adventures'? Why did he leave the show?
DO NOT MISS
AKHILESH VISITS AZAM KHAN IN JAIL
JUSTICE S. MURALIDHAR ON TRANSFER
BREACH OF PROPRIETY OR CONVENTION?
DELHI VIOLENCE: CRIME BRANCH FORMED
SHOCKING FINDINGS AT TAHIR'S OFFICE
SONIA GANDHI MEETS PRESIDENT