'Squid Game': Here’s What Jeff Bezos Has To Say About Netflix K-Drama Hit

Jeff Bezos took to his Twitter account on Sunday to applaud Netflix for its 'internationalization strategy' in relation to ‘Squid Game’. 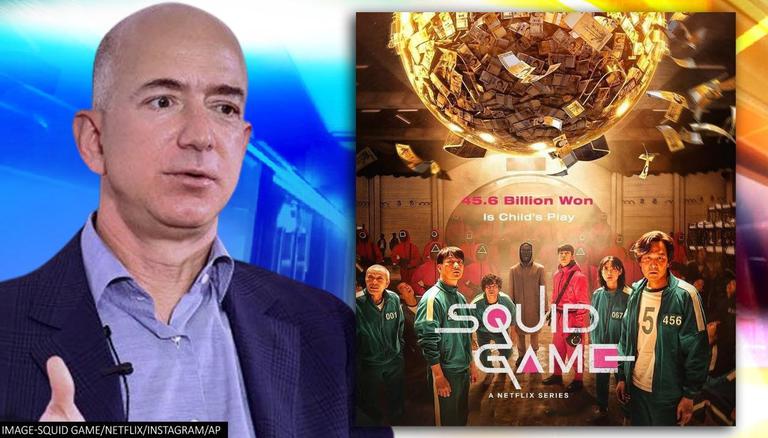 
Jeff Bezos took to his Twitter account on Sunday to write about one of the highest-ranking series on Netflix, Squid Game. The founder of Amazon applauded the online streaming platform for its 'internationalization strategy' for turning non-English shows into hits across the globe. Squid Game has received heaps of love and praise and has ranked number one in about 90 countries within about 10 days. Jeff Bezos headed to Twitter to laud Netflix co-CEO Ted Sarandos and the Chief Executive Officer of Netflix, Reed Hastings. He mentioned that the duo and the entire team at Netflix 'get it right so often'. He also mentioned that their 'internationalization strategy' is not an easy one, but they 'make it work'. He called it 'impressive and inspiring' as he continued to say that he couldn't wait to watch Squid Game. He tweeted, "@ReedHastings and Ted Sarandos and the team at @Netflix  get it right so often. Their internationalization strategy isn’t easy, and they’re making it work. Impressive and inspiring. (And I can’t wait to watch the show.)."

.@ReedHastings and Ted Sarandos and the team at @Netflix get it right so often. Their internationalization strategy isn’t easy, and they’re making it work. Impressive and inspiring. (And I can’t wait to watch the show.) https://t.co/yFw7TGyc1U

Twitter users were surprised by the tweet and began to wonder what the hidden meaning behind it was. An individual mentioned that something was up and Bezos replied to his tweet. He clarified that nothing was amiss, and he was simply admiring the streaming platform. He wrote, "No, just simple admiration."

READ | As 'Squid Game' trends globally, see how to make the famous 'Dalgona candy' from the show

Squid Game took Netflix by storm after its release and millions from across the globe fell in love with the show. The show has surpassed other hit series like Bridgerton, Ginny and Georgia, Who Killed Sara? and others. Squid Game follows 456 people, who all have one thing in common. They have all faced financial struggles in their lives and have been invited to play a survival game. The game requires them to take part in a series of children's games, that have unexpected and deadly twists. They must all put their lives on the line for a chance to win a cash prize. Lee Jung Jae, who plays Seong Gi Hun in the show, spoke to Allkpop media and mentioned that he was in awe of the responses the show got from across the globe and mentioned that his friends from other parts of the world were also reaching out to him to applaud him for his work.

WE RECOMMEND
'Squid Game' director reveals why it took him a decade to pitch the script to Netflix
'Saturday Night Live' goofs on Amazon's Jeff Bezos with his own 'Star Trek' series
'Squid Game': Korean Man gets bombarded with calls after his no. appears on Netflix show
Did you know Netflix's binged series 'Squid Game' has an Indian connection? Read
Netflix's 'Squid Game' ranks on OTT, Lee Jung Jae says 'didn't expect to get this popular'
Listen to the latest songs, only on JioSaavn.com