"There is money invested, there maybe interest (on it), someone wants to minimise the loss and if they are in a position to monetise it, we can't stop them."

The announcement of the direct digital release of seven films, including two major Bollywood movies, has split the industry with several multiplex chains saying they are alarmed and producers upset at the "unconstructive messaging" from the exhibitors.

The war of words, at a time the entertainment industry faces crippling revenue losses following the coronavirus-forced lockdown, was triggered by Amazon Prime Video acquiring Amitabh Bachchan-Ayushmann Khurrana-starrer "Gulabo Sitabo" and "Shakuntala Devi", with Vidya Balan in the title role of the mathematics whiz, for direct-to-digital premieres.

"There is money invested, there maybe interest (on it), someone wants to minimise the loss and if they are in a position to monetise it, we can't stop them. The situation is such that you cannot blame anyone," Umrotkar told PTI. Some single screen owners, who have faced competition from multiplexes, also said they understand the dilemma of producers. 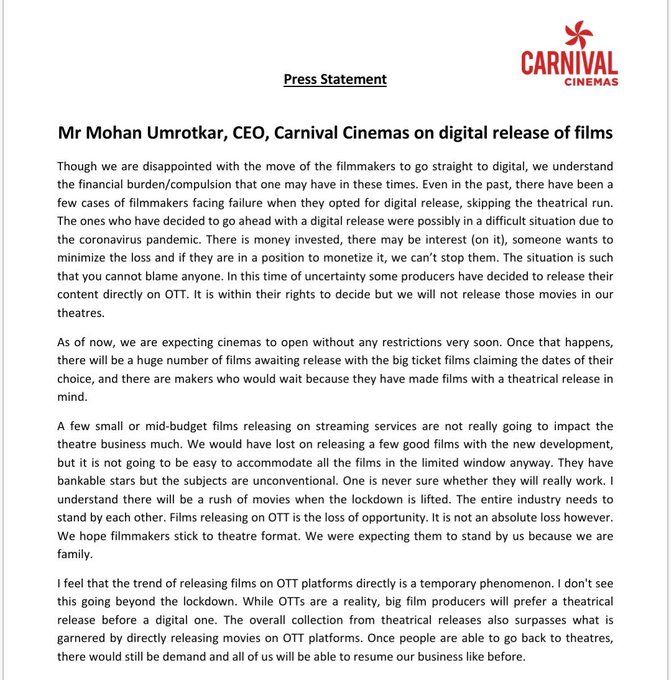 Sensing trouble ahead, the Multiplex Association of India (MAI) earlier this month issued a statement appealing to studios, producers and artistes to support the cinema exhibition sector by withholding the release of their films.

"The entire industry needs to stand by each other. It (films releasing on OTT) is the loss of opportunity. It is not an absolute loss. We hope filmmakers stick to theatre format."

Do theatres run movies or do movies run theatres? Pooja Bhatt on Theatres Vs OTT debate

"We recently had a word with Akshay Kumar to not release his films on OTT. He has told us that Sooryavanshi' will release in theatres but Laxxmi Bomb' might follow the digital route. We are yet to get in touch with other top actors including Salman," Manoj Desai, executive director of G7 Multiplex and Maratha Mandir, told PTI.