In a night, everyone knew about the 'wink girl' Priya Prakash Varrier. In a recent video shared by the actress, she can be heard singing to her hearts content that has left many netizens impressed.

In a night, everyone knew about the 'wink girl' Priya Prakash Varrier. Within a few hours, she was named as the 'national crush' and while the actress has bagged a Bollywood film, 'Sridevi Bungalow', she recently released a video on Instagram where she can be seen crooning to her hearts fill. "I thank you all from the bottom of my heart for the wonderful response to my first attempt!.", she wrote.

READ: Is Priya Prakash Varrier Dating Co-star Roshan Abdul Rahoof, Here's What The 'Oru Adaar Love' Actress Has To Say About It

I thank you all from the bottom of my heart for the wonderful response to my first attempt!Do watch the full video if you haven’t by clicking the link in my bio. @kailasmenon2000 @iamnareshiyer @prarun @niranj_maniyanpillaraju @rajishavijayan

Ever since the video has been posted, it is going viral on the online space and netizens have been lauding the young actress' singing skills. "Beautiful voice", "This is good", read some of the comments. 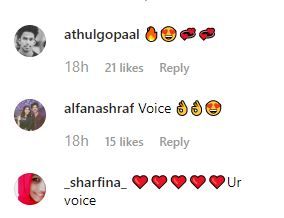 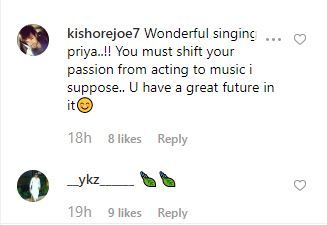 On the work front, the actress was last seen in her debut film, 'Oru Adaar Love'. However, although the wink from the film made her quite famous, the film failed to impress the critics and the audience and thus tanked at the box office.

Varrier is also set to make her Bollywood debut with 'Sridevi Bungalow', but it has been dragged into controversy after the teaser of the film released a while back. The husband of the late actress Sridevi, filmmaker Boney Kapoor has also sent a legal notice to the makers of the film for depicting scenes that implied parallels between the character and the demise of the veteran actress.

On the personal front, speculations are rife that the actress is dating her 'Oru Adaar love' co-star Roshan Abdul Rahoof. Speaking about the rumours, the actress said that speculations are a part and parcel of her profession and that she knows that the two are a 'much in demand' pair. She further added that all the buzz fade out once the reality sets in.