After Mohanlal, Mammootty, and Tovino Thomas, Dulquer Salmaan is the latest Malayalam actor to be conferred with a 10-year Golden Visa from the UAE government. 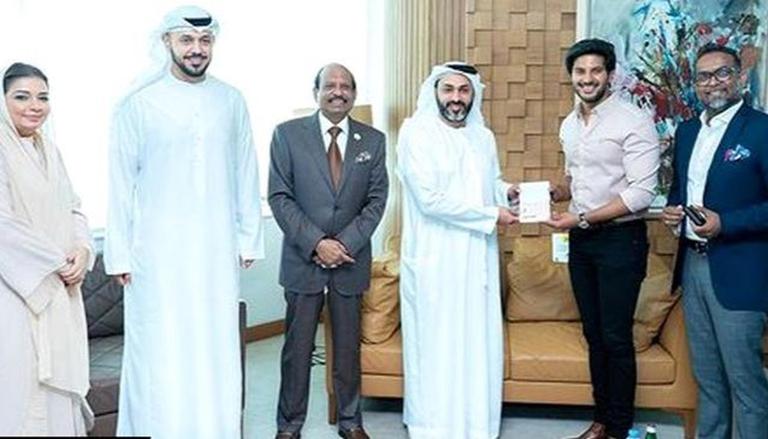 
After Mohanlal, Mammootty, and Tovino Thomas, Dulquer Salmaan is the latest Malayam actor to be conferred with a UAE's Golden Visa. The actor took to social media to express gratitude for the honour bestowed upon him.

Sharing the photo from the ceremony which was held in Abu Dhabi, Dulquer wrote, "Had the privilege and honour of receiving my golden visa from His Excellency Saood Abdul Aziz in the presence of Mr Yusuf Ali. It was wonderful to hear of all the future plans of the Abu Dhabi govt to promote film and production activities, and also to encourage new talent locally and internationally. Looking forward to productions, shoots and spending more time in Abu Dhabi and the UAE.(sic).”

In August, Dulquer’s father and superstar Mammootty had received his UAE Golden Visa, along with another superstar Mohanlal. Recently, Boney Kapoor and his daughters Jahnvi Kapoor and Khushi have also been conferred the prestigious UAE Golden Visa. Among others, south Indian actor Prithviraj, Tovino Thomas, and Bollywood actor Sanjay Dutt had also received the honour a few weeks ago.

The UAE government had introduced the Golden Visa program in 2019 which allows the recipient to live and work in the nation without a national sponsor for a period of 10 years.

Dulquer, who was last seen in the romantic heist comedy film Kannum Kannum Kollaiyadithaal, has an interesting line-up of projects. He will next be seen in Kurup, Hey Sinamika, and Salute. He has also signed untitled films with directors R Balki, Hanu Raghavapudi, and Joy Mathew.

Recently, the first look image of ‘Adi’ which is backed by Dulquer’s Wayfarer Films has been released. The film stars Shine Tom Chack in the lead role. Directed by Prasobh Vijayan, the film was shot last year by a limited crew keeping in mind the Covid-19 protocols.

READ | As Mammootty turns 70, son Dulquer Salmaan says, 'fortunate to be your family'