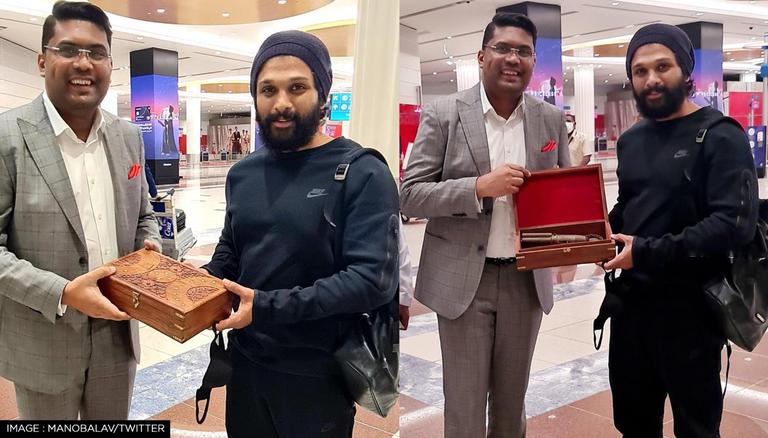 
South Indian actor Allu Arjun’s recent trip to UAE became more memorable after he received a special gift from a Malayalee businessman. A businessman named Riyaz Kilton surprised the actor with a 160-year-old pistol. The pictures of the businessman gifting the actor have gone viral on social media. In the pictures, the actor can be seen in black cool casuals while the businessman wore formals as the two pose with the pistol.

Allu Arjun is gearing up for the release of his next film Pushpa. Directed by Sukumar. The film will be made in two parts. The first part titled, Pushpa: The Rise, will release on Christmas 2021. The action-drama features Rashmika Mandanna and Fahadh Faasil in lead roles. Makers on September 29, had unveiled Rashmika’s first look on social media. She will be seen playing Allu Arjun’s love interest Srivalli in the forthcoming film.

During his recent visit to UAE, the actor received a surprise during his visit to a local place in the country. In the pictures, the businessman gifted the gun in a box and flaunted its look as well. Photos of the actor with the vintage pistol are doing the rounds on social media. The businessman Riyaz is a native of Kerala settled in the UAE and is fond of Allu Arjun. He displayed his fanboy moment by presenting the actor with the special gift.

Earlier, as per a report by PinkVilla, Pushpa's final schedule was supposed to be shot in Maredumilli. A few days ago, Allu Arjun and his team headed for the town to shoot the last leg of the film. However, it was postponed due to heavy rain. The actor and the team soon left for Kakinada for shooting. The locals at Meredumilli warmly greeted the actor as they gathered around his car. Allu Arjun was also seen greeting his fans in the photos that surfaced.

The film will mark Rashmika's first PAN India project. The supporting roles in the film will be played by Dhananjay, Anasuya, Sunil, Vennela Kishore, Prakash Raj, Dayanand Reddy, Deepak Shetty, and Anish Kuruvilla. Meanwhile, apart from Pushpa, Allu Arjun has signed a film each with directors Venu Sriram and Koratala Siva. He is also in talks with director AR Murugadoss and KGF director Prashanth Neel.

READ | Allu Arjun extends b'day wishes to his wife Sneha; calls her 'the most special person'