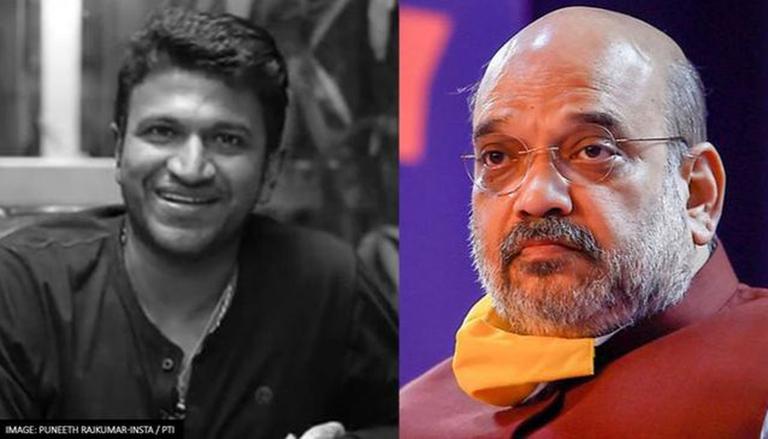 
Union Home Minister Amit Shah on Friday paid his tributes to Kannada actor Puneeth Rajkumar, who breathed his last on Friday morning after suffering a cardiac arrest while exercising in the gym. The 46-year-old was rushed to the Vikram Hospital in Bengaluru, where he was being treated in the Intensive Care Unit (ICU).

In a tweet, Shah lamented the death of the Sandalwood superstar and recalled his versatile style of acting that has brought many enamoured memories to the cinema in Karnataka.

"The sad death of talented actor Puneeth Rajkumar is sad. Puneeth Rajkumar, who has won millions of hearts with his versatile acting, has brought many fond memories to Kannada cinema. My condolences to his family and immense fan base," Home Minister Amit Shah tweeted in Kannada while sharing a picture of the superstar. He offered his condolences to his bereaved family and admirers.

Prime Minister Narendra Modi on Friday condoled the demise of Kannada actor Puneeth Rajkumar. In a tweet, PM Modi called it a cruel twist of fate and said that it was no age to go. The Prime Minister also offered his condolences to his bereaved family and admirers.

READ | Puneeth Rajkumar’s death: ‘James’ and other unfinished projects of the power star

A cruel twist of fate has snatched away from us a prolific and talented actor, Puneeth Rajkumar. This was no age to go. The coming generations will remember him fondly for his works and wonderful personality. Condolences to his family and admirers. Om Shanti. pic.twitter.com/ofcNpnMmW3

Taking to her Twitter handle, Nirmala Sitharaman wrote, "Condolences on the passing away of #PuneethRajkumar. A bright star. He had a long promising career ahead. My condolences to his family, his innumerable fans and followers."

Congress leader Rahul Gandhi also shared his heartfelt condolences to the family, friends, and fans of the Sandalwood actor.

My heartfelt condolences to the family, friends and fans of Kannada actor Puneeth Rajkumar.

Karnataka Chief Minister Basavaraj S Bommai said that he is shocked and deeply saddened by Karnataka's most loved superstar's death. "A huge personal loss and one that's difficult to come to terms with. Praying the almighty gives the Rajkumar family and fans the strength to bear this loss," he tweeted.

Shocked and deeply saddened as Karnataka's most loved superstar #PuneetRajkumar is no longer with us.
A huge personal loss and one that's difficult to come to terms with.
Praying the almighty gives the Rajkumar family and fans the strength to bear this loss.#OmShanti pic.twitter.com/QpF63vKvIO

Bharatiya Janata Party president Jagat Prakash Nadda said that he was anguished to learn about the demise of the very talented Puneeth Rajkumar. He said that Puneeth will be remembered for his outstanding works.