Ammy Virk shared a few images from the poster shoot of his new song with Sweetaj Brar titled 'Khabbi Seat' where the artist can be seen posing with a jeep.


Ammy Virk is preparing to release his new song Khabbi Seat, which will feature Sweetaj Brar. The star has already unveiled the new track's poster, where he can be seen leaning against a brown jeep. The artist shared a few photos from his Khabbi Seat poster shoot for the song on April 5, 2021, on his Instagram profile. While sharing the pictures, Ammy Virk announced the time that the song would drop and followed the information by saying, “Waheguru Mehar Karan” (God Almighty be graceful to me and bless me).

The slew of pictures that Ammy Virk has shared on his Instagram profile sees him rocking the same attire which he is seen wearing in the poster of the song that consists of a leopard printed shirt that is unbuttoned on the collar, a pair of black slim-fit trousers and black leather shoes. He has tied in his look with an orange turban and a gold watch. All of the pictures see the artist posing against a chocolate brown jeep that was also seen in the poster and the promos of the song. He has struck a variety of poses in the pictures he has shared, ranging from him looking away from the camera to him looking into the camera and smiling widely.

READ | Ammy Virk opens up about paid views on 'Main Suneya'; says 'views are not fake' 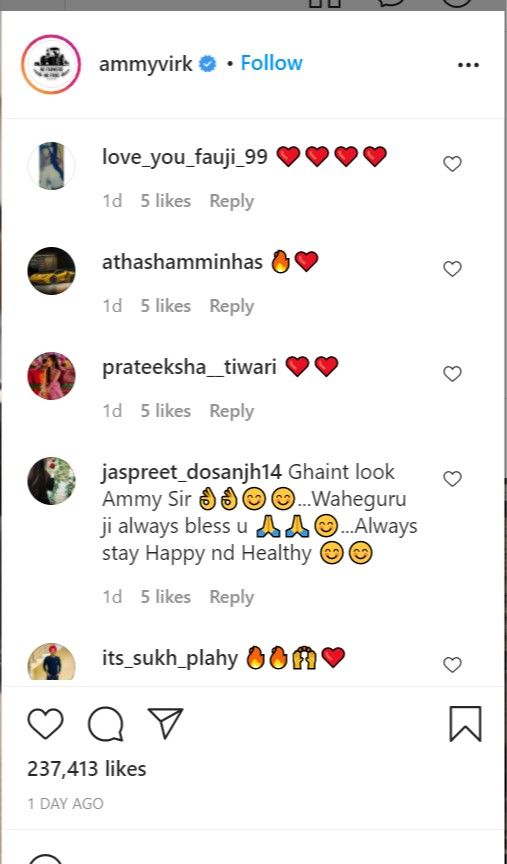 Fans and followers of Ammy Virk’s songs took to the comments to let their feelings known. Some people told the singer that he looked absolutely dashing in the outfit which was stylish. Other people commented saying that they could not wait for the song to be out and enjoy it. Yet others said that they wished Virk received all of the blessings from God which he was seeking and much more. The post has received a total of 237k likes and 1,406 comments and still counting.

Ammy Virk’s Khabbi Seat dropped yesterday and it is an upbeat song that speaks of love and longing. Ammy Virk can be seen as a man with anger issues but one who attracts a sweet girl played by Sweetaj Brar. The song shows how love can transform just about anyone.