Archana Kavi Shares A Comic Dance Video On Instagram; Says, "This Will Continue"

Actor and host Archana Kavi has shared a funny dance video where she is seen dancing to a pop song with her friend and pet dog Pluto; Watch


Archana Kavi is known to often share entertaining content for her fans on social media. While she has posted amusing pictures and videos on Instagram on several occasions, her recent post is quite different from the rest. In her recent Instagram post, Archana is seen dancing with her friend to a famous pop song. She is seen flashing her movies in a hysterically funny manner and also penned a funny message in the caption for her fans. The video ended up going viral as netizens sent a wave of amused reactions to this video.

While many celebrities have shared their dance videos on social media, the one shared by Archana Kavi is quite different than expected. The actor is seen dancing on Temperature, which is one of the most popular songs by singer Sean Paul. Archana’s Instagram post has a list of various clips merged into one, which shows her moving on the beats at different locations. One of the clips even shows her dancing on a table, while her friend shakes her leg in the background.

However, one of the highlight moments in the video came when she even brought her pet dog Pluto in the frame. Her pet is seen in several clips in the video and both Archana and her friend took turns in holding him while grooving on the beats. She wrote in the caption of this post, “This will continue till I don’t get well 🤧”. She also added an amusing disclaimer for the video which reads, “PS: no animals were hurt during the making of this reel”. Her fans soon sent their excited reactions in the comments, with many of them saying that her pet dog stole the show. They laughed at the video and praised their dance moves as well. 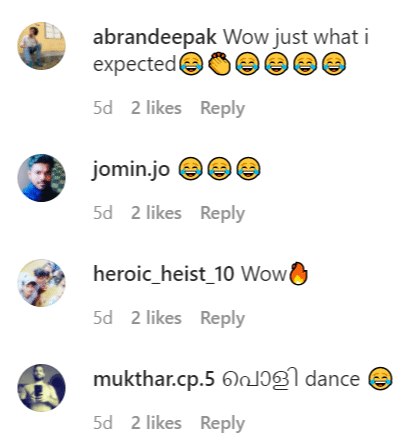 Archana Kavi is a popular face in the Malayalam film industry, having worked in a long list of films. These include To Noora with Love, Honey Bee, Abhiyum Njanum, Pattam Pole and many more. Apart from being an actor, Archana is also a known TV host and a Youtube personality.