Given the hype that was created around 'Beast', fans were quite excited to watch the star on the big screen and even created a ruckus during the screening. 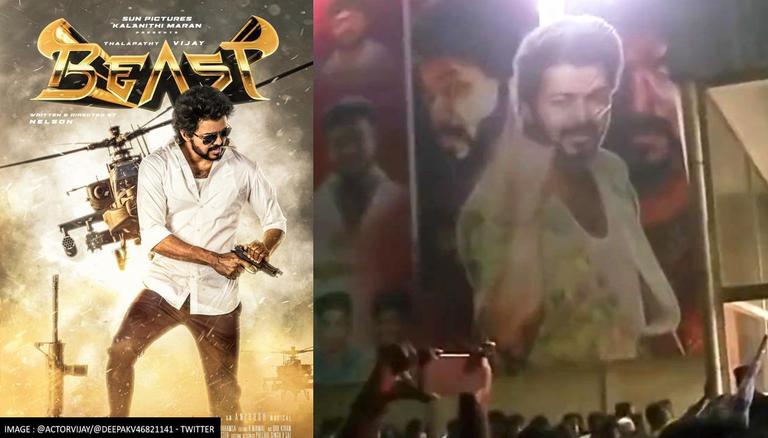 
Amid much anticipation, South star Vijay starrer Beast has finally hit the theatres. The action-thriller which is high on stunts and death-defying stunts is likely to shatter multiple box office records, particularly in Tamil Nadu on its first day. With the film’s release, fans flocked cinema halls to catch a glimpse of their favourite star back in action.

Given the hype and build-up that was created around the film, fans were quite excited to watch the star on the big screen. However, with the latest videos and pictures coming in from Coimbatore, it seems that the fan craze was a top-notch higher this time. Thousands of fans flocked to the Rohini Theater in Coimbatore early this morning to see a special screening of Vijay’s Beast.

Moviegoers cause damage in Coimbatore theatre during Beast screening

Many who had congregated in front of the theatre for the early morning show did not have legitimate tickets, and the theatre employees were unable to keep them under control as the mob stormed the theatre. The trespassers then broke the LED displays installed on the theatre sidewalls. The damage cost a lot to the theatre owner as the moviegoers stormed outside the hall causing a lot of destruction.

This is not the first time that an incident of such sort happened. Earlier when the gripping trailer for Vijay’s film was out, fans reacted similarly. The trailer for Beast received a rousing welcome from fans during public screenings around Tamil Nadu. The trailer was made available in a premium big format.

While some fans showed their enthusiasm by bursting crackers outside movie theatres then, others left the show in various places, including Nellai Ram Cinemas, breaking the chairs and glass panes. During the showing, supporters were allegedly dancing on chairs. Several videos flooded social media then which showed how the fans reacted to the trailer by damaging the property of the theatres. Apart from Vijay, Pooja Hegde, ace filmmaker Selvaraghavan, and Malayalam actor Shine Tom Chacko feature in the film directed by Nelson Dilipkumar.
Meanwhile, Beast, as per a report Sacnilk, was expected to earn around Rs 50 crore, on opening day. The figures were estimated on the basis of the occupancy in the morning shows. The majority of the collections was to be contributed from the Tamil version, and that had a occupancy of 66.39 per cent for the morning shows.