'Bhajarangi 2' Twitter Review Out: Here's How Fans Are Reacting To The Shiv Rajkumar Film

Directed by A Harsha and produced by Jayanna and Bogendra, 'Bhajarangi 2', starring Shiva Rajkumar and Bhavana Menon released in theatres on October 29. 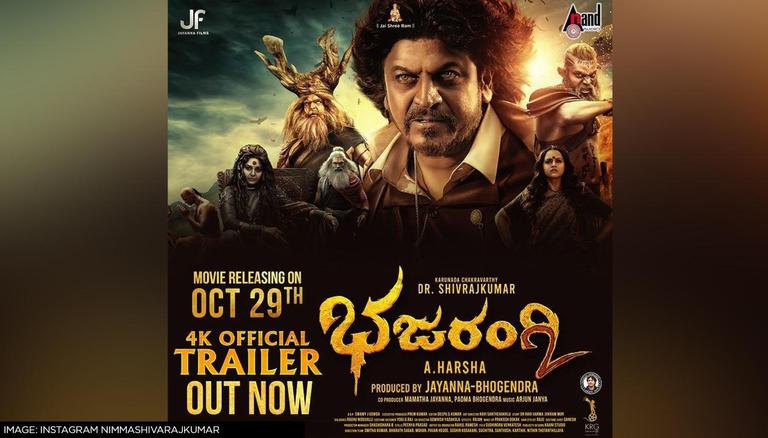 
The much-awaited film Bhajarangi 2 was finally released in theatres on Friday, October 29, and is already trending on social media platforms. Fans can be seen tweeting their reactions and reviews regarding the film after watching first-day first shows. Also, several fans were seen expressing their excitement to watch the film which marks the first big release following the COVID-19 pandemic.

Directed by A Harsha and produced by Jayanna and Bogendra, the film has been made under the banner of Jayanna Combines and is the sequel to the 2013 hit, Bhajarangi.

Read on to know Twitterati reacted to Bhajarangi 2.

#Bhajarangi2 is a visual treat for sure 😍😍
Excellent work by Harsha as director 👏👏
Shivanna acting in 2 roles just awesome 😍😍
My personal favorite 'Chaluvaraj' acting is mind-blowing 😍😍
2nd half 👌👌👌
Rating : 4/5

Never seen before, celebrations for the movie release #Bhajarangi2 ...
I think this is first time in kfi
Hattsoff shivanna fans.. 🙏

Something Big coming up 🤫

#Bhajarangi2 is not a movie, it's a spectacle!! You will be mindblown! 2nd half will make you shiver. @NimmaAHarsha take a bow master:)

What a MARVELOUS movie by @NimmaAHarsha & this is how u need to show a Superstar on Big Screen.@NimmaShivanna is OUTSTANDING in each & every Frame ... Brilliant performance by all.
CG / VFX at Top Class.
Actions scenes are Brilliant.
BGM is FANTABULOUS. pic.twitter.com/hsjXPFdpXM

Bhajarangi 2 features actor Shiva Rajkumar in the lead role with Bhavana Menon in another important role.

Earlier, the movie was supposed to release on September 10 but was postponed due to the COVID-19 situation. Even after a delay, shortly after its release, the film has already started gaining positive reviews from audiences and critics who are praising its storyline, dance performances, dialogue delivery, action stunts, background score, climax sequence, and other elements.

A sequel to the 2013 fantasy drama film Bhajarangi, Bhajarangi 2 is also expected to create a landmark in the Kannada film industry and is currently trending among fans. The film features many other star actors including Saurav Lokesh, Shruthi, Cheluvaraj, Shivaraj KR Pete, Prasanna Baagin, and Vajragiri.