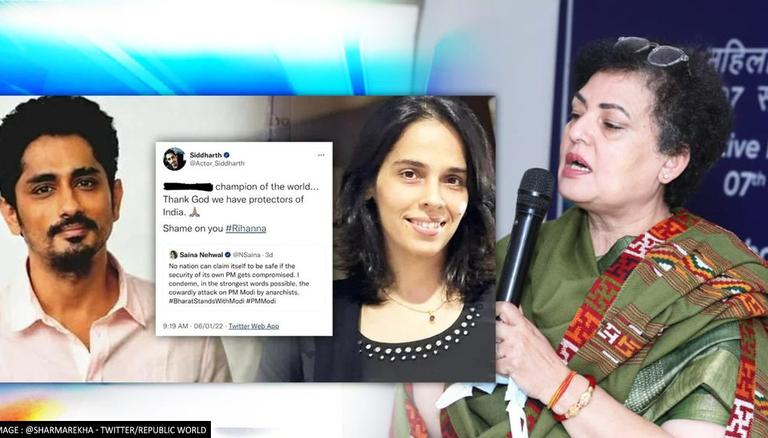 
Taking cognizance of the ‘misogynistic’ remarks made by the actor Siddharth against Padma Shree awardee Badminton player Saina Nehwal, the National Commission of Women has written to Twitter India asking them to take down the handle of the actor. Siddarth has alleged made ‘crass’ remarks against Saina Nehwal over her tweet on the breach of PM Modi's security in Punjab.

NCW issued a statement on Monday and informed that the commission had found the Rang De Basanti actor’s comment "misogynist and outrageous to the modesty of a woman amounting to disrespect and insult to the dignity of women on social media platforms."

The NCW has also written to the DGP Maharashtra to immediately investigate the matter and register an FIR against the actor for disrespecting a woman by making ‘lewd’ comments on Social media. The organisation had sought prompt actions against the actor and accused him of using "indecent language for women on social media."

The Resident Grievance Officer of Twitter India has been asked by the NCW Chairperson to "immediately block" the actor's account and take "appropriate action" against him "for posting offensive remarks" on Nehwal's post. The NCW stated that the Tamil Actor had "outraged Nehwal’s modesty" and "insulted her right to live with dignity".

The development came hours after the National Women Commission Chairperson Rekha Sharma slammed the Telugu actor for his salacious choice of words. Earlier in the day, Rekha Sharma took to Twitter to respond to Siddharth’s tweet by asking Twitter officials to seize his account for making outrageous comments on Nehwal.

This man needs a lesson or two. @TwitterIndia why this person's account still exists?..taking it up with Concerned police. https://t.co/qZD2NY5n3X

Actor Siddharth has been facing heat from all ends for using indecent words while responding to a Tweet made by Saina Nehwal. From women politicians to celebrities, to his followers, people have denounced him for disrespecting a woman by making ‘crass’ comments.

The controversy erupted after Actor Siddharth responded to a tweet made by badminton player Saina Nehwal denouncing PM Modi’s security breach. In her tweet, Saina had condemned the security lapse in the Prime Minister's security during his visit to Ferozepur on January 5. Saina had tweeted, "No nation can claim itself to be safe if the security of its own PM gets compromised. I condemn, in the strongest words possible, the cowardly attack on PM Modi by anarchists. #BharatStandsWithModi #PMModi (sic)."

Criticizing Saina, Siddharth wrote, "Subtle cock champion of the world... Thank God we have protectors of India Shame on you #Rihanna."

Subtle cock champion of the world... Thank God we have protectors of India. 🙏🏽

Shame on you #Rihanna https://t.co/FpIJjl1Gxz

Meanwhile, the actor has stated that he did not aim to offend anyone and that his "subtle cock" post was not intended to be derogatory. "Cock and bull. That's the reference. Reading otherwise is unfair and leading. Nothing disrespectful was intended, said or insinuated. Period," he had tweeted.