South stars Chiranjeevi and Sai Dharam Tej wish good luck to actor Allu Arjun on Twitter, ahead of his next release Puspa: The Rise part-1 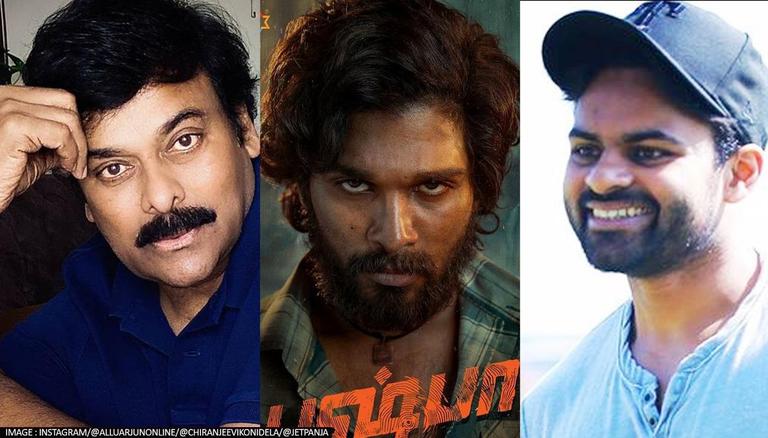 
Allu Arjun and Rashmika Mandanna starer Puspa has become one of the most anticipated films of the year with its fans eagerly waiting for its pan India release. Ahead of its release, Sai Dharam and Megastar Chiranjeevi took to their Twitter accounts and expressed their excitement about the film and also wished luck to Allu and his team.

Wishing dear @alluarjun Director #Sukumar @iamRashmika @MythriOfficial & entire Team of @PushpaMovie All the Very Best!
You all have put your Blood,Sweat,Heart & Soul into this film! I wish all your efforts will be whole heartedly appreciated! Good Luck 👍

Megastar Chiranjeevi in his tweet shows support to Allu's latest release, as he writes "All the Very Best! You all have put your Blood, Sweat, Heart & Soul into this film! I wish all your efforts will be wholeheartedly appreciated! Good Luck ", along with a folded hands emoji. Adding to this, the netizens also flooded the comments section with fire and heart emojis, expressing their excitement for the film.

Evident from the content that Team #Pushpa has put in their blood & sweat.
Wishing that your Hardwork pays off immensely Bunny @alluarjun

Praising the team of Puspa Sai Dharam Tej writes: "Evident from the content that Team #Pushpa has put in their blood & sweat. Wishing that your Hardwork pays off immensely ".He further adds that Bunny aka Allu Arjun and Rashmika Mandanna are dedicated actor's and they can deliver only the best and probably Puspa will be among one of the best films of the year. Cousin Sai Dharam keeps showering love on brother Allu before his next release which indicates the strong bond that the duo share.

The trailer of the highly awaited film Pushpa: The Rise was released a few days back and the trailer seems flawless with the perfect blend of raw and dense action content. From the trailer, it is very evident that the film offers some stunning visuals. The character Puspa Raj can be seen fighting through all the rivals with his killer attitude. Though the film is an action thriller movie, you will also get to see Allu having fun amidst all the chaos. Rashmika on the other hand will be seen in a different and unusual avatar. To get into her character Rashmika learned slang language and she had to pick up a specific dialect. The plot of the film is based on real-life incidents about red sandalwood smugglers prevalent in the Chittoor district of Andhra Pradesh.

This movie marks the Telugu debut of actor  Fahadh Faasil, who is playing the role of an Antagonist here. Helmed by Sukumar the film is set to hit the screens tomorrow i.e on 17 December.

READ | Allu Arjun opens up on working in 'Pushpa': 'It was equivalent to doing four films'