One of the most sought-after young actors of the South film industry, Rashmika Mandanna and Vijay Deverakonda were spotted together in Mumbai. 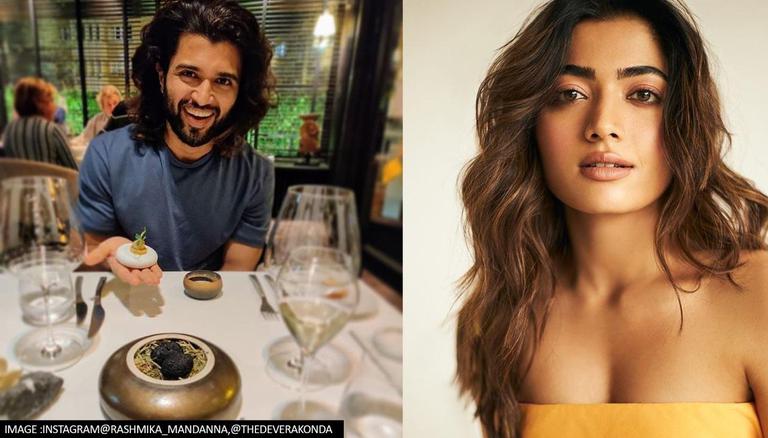 
One of the most sought-after and popular of the South film industry, actors Rashmika Mandanna and Vijay Deverakonda are making headlines after being spotted together at dinner. Their recent rendezvous which has been making rounds on the internet with pictures of them together gave rise to several speculations by the netizens. Both the actors are set to make their debut in Bollywood soon.

Did Rashmika Mandanna take this photo of Vijay Deverakonda?

The internet was frenzied after fan accounts dedicated to the actors started posting pictures of Rashmika Mandanna and Vijay Deverakonda's recent meet up at a restaurant in Mumbai. The 25-year-old actor was spotted in an all-black outfit while Deverakonda, 32, sported a tiger print shirt. Their pictures were enough to trigger an onset of dating speculations although both the actors have not confirmed the same yet.

After the duo was spotted together in Mumbai, the Liger actor took to his Instagram to share a picture from their alleged date night. In the picture, the actor sported the same tiger print shirt as he was seen holding an empty bottle in his hand. He captioned the post by writing, ''I have been doing lots of drinking this past week!'' It was not long before fans started speculating that the picture was taken by his rumoured date Rashmika Mandanna.

Mandanna is all set to make her debut in the Hindi film industry in the film Mission Majnu opposite Sidharth Malhotra. The movie will focus on the journey of a RAW agent who heads India's covert operation on Pakistani soil. The movie also stars Sharib Hashmi and Kumud Mishra.

On the other hand, the Arjun Reddy star is all set to bring the sports drama film Liger to the theatres next year on 25 August 2022. The film will also feature a cameo from the legendary boxer, Mike Tyson. Apart from Vijay and Mike Tyson, actors Ananta Panday, Ramya Krishnan and Ronit Roy are set to play significant roles in the film. With no official release date announced, the movie will release in Telugu, Hindi, Tamil, Kannada, and Malayalam.

READ | Rashmika Mandanna goes de-glam in 'Pushpa'; reveals why she chose the avatar

WE RECOMMEND
Allu Arjun gets special gift from Vijay Deverakonda on release of 'Pushpa: The Rise'
Rashmika Mandanna talks about tackling fear & anxiety in latest post; fans say 'inspiring'
'Saami Saami': ‘Pushpa’ makers wow fans with yet another song from the Allu Arjun-starrer
'Liger' stars Vijay Deverakonda-Ananya Panday & co are living it up in USA; See pics
'Pushpa: The Rise' director Sukumar had to convince Samantha Ruth Prabhu to do 'Oo Antava'
Listen to the latest songs, only on JioSaavn.com