'Drushyam 2': Ahead Of Release, Rambabu Reveals What Fans Can Expect From The Film

Ahead of 'Drushyam 2' release, Venkatesh Daggubati revealed major details about what fans can expect from Jeetu Joseph's crime drama. Take a look. 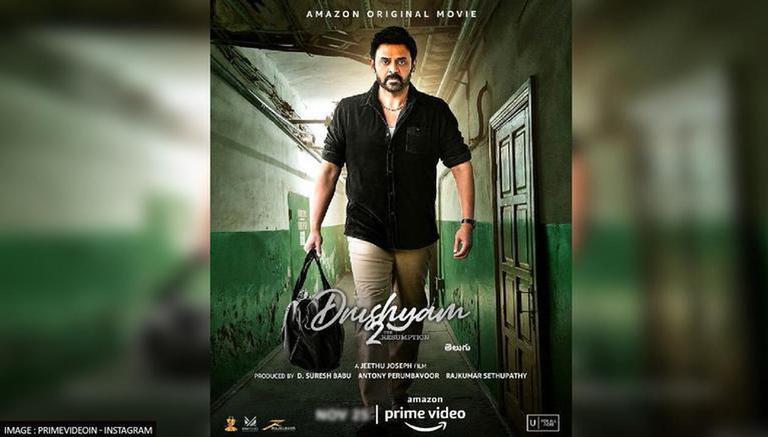 
Venkatesh Daggubati's Drushyam 2 is all set for its release, with Rambabu embarking on a journey to safeguard his family amid intense investigations and scrutiny. With just a few hours to go before its digital premiere via Amazon Prime Video, the protagonist revealed major details about the film, furthering fans' curiosity.

In a clip uploaded by Suresh Productions, the actor could be seen telling audiences to expect a lot of "thrill, mystery and suspense", coupled with "a lot of unravelling of Rambabu's secrets". He further described Drushyam 2 as a movie based on the themes of "family, love and protection". Venkatesh has also drawn some learnings from his character, one of which is "knowing what your priorities are, and sticking by them, no matter what". Many other intriguing secrets are set to be revealed as the film premieres on Thursday, November 25.

The forthcoming thriller drama, which is helmed by Jeethu Joseph, showcases the plot's development from where the first film concluded. It focuses on Rambabu, whose family is threatened by an investigation into the past. It will showcase how he goes above and beyond to protect his loved ones. The film promises a thrilling adventure and a gripping storyline.

READ | Venkatesh wraps up shooting for 'Drushyam 2'; filming had begun in March 2021

Apart from Venkatesh, it also stars Meena, Kruthika, Esther Anil, Sampath Raj, Poorna, and others in pertinent roles. In a recent conversation with ANI, Venkatesh noted that the film will take viewers on an "emotional yet exhilarating journey". "The twists and turns in the plot that keep the suspense alive, and our viewers yearning for more," he further remarked.

The overarching success of the first instalment gave the makers impetus to churn out another movie. "The response we have received-and the cult-status 'Drushyam' achieved--was unprecedented and gave impetus to all of us to take the legacy forward with 'Drushyam 2'," the actor noted.