Dulquer Salmaan and Mrunal Thakur are gearing up for the release of their much-awaited romantic drama, Sita Ramam, which is scheduled to release on August 5. 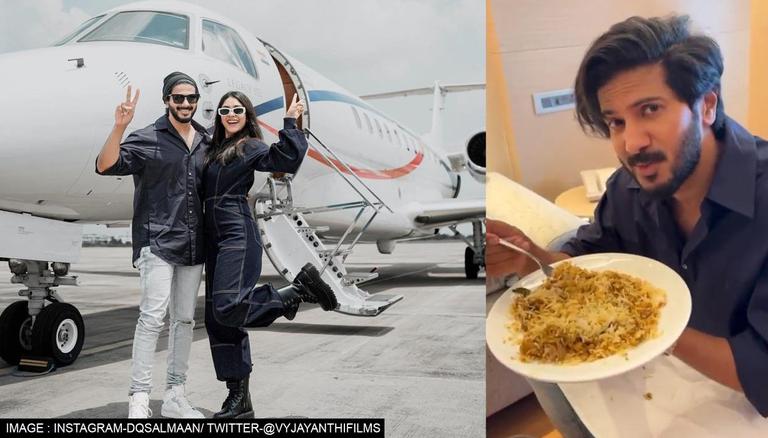 
Dulquer Salmaan and Mrunal Thakur are currently gearing up for the release of their much-awaited romantic drama, Sita Ramam which will also star Rashmika Mandanna in a pivotal role. The film is scheduled to hit the big screens on August 5, 2022, and the team is currently travelling across the country to promote the film. Dulquer Salmaan was recently spotted relishing a plate of Ulavachaaru Biryani while promoting the movie in Vijaywada.

A video of the popular Hey Sinamika actor relishing a plate of Ulavachaaru Biryani made its way online on July 31 as Dulquer Salmaan and the team behind his upcoming film promoted the movie in Vijaywada.

In the clip, the actor was seen in a formal blue shirt as he eat his meal and looked at the camera and expressed how much he was enjoying the delicacy. He said, "Hi guys eating the world-famous Ulavachaaru Biryani in Vijaywada. It's so yum!"

When @dulQuer also became a fan of Ulavachaaru Biryani 😋

The leading duo of Sita Ramam have been touring the country as they promote their upcoming movie. Dulquer took to his social media account and shared glimpses of his time with his team. He was seen in a black shirt and denim blue jeans, which he wore with a beanie and sunglasses.

He looked dapper as he posed alongside Mrunal Thakur, who looked stylish in a denim romper. The actor captioned the post, "Andhra we are coming to you ! First stop Vijayawada and then onto Vizag!! Cannot wait to meet all of you!!"

Dulquer will be seen playing the role of Lieutenant Ram alongside Mrunal, who will play Sita. The trailer of the film was all about their magical chemistry and the close bond they share. The clip opens with Rashmika Mandanna looking for Sita Mahalakshmi as she has to deliver a letter to her that Ram had written 20 years ago.

He looks everywhere possible but to no avail, and finally decides to look for Ram instead. Apart from love and sweet moments, the trailer also includes thrill and suspense, and fans can't wait to watch the movie on the big screen on August 5.