Hansika Motwani is all set to tie the knot with businessman Sohael Khaturiya, and was spotted leaving for Jaipur with her family ahead of the big day. 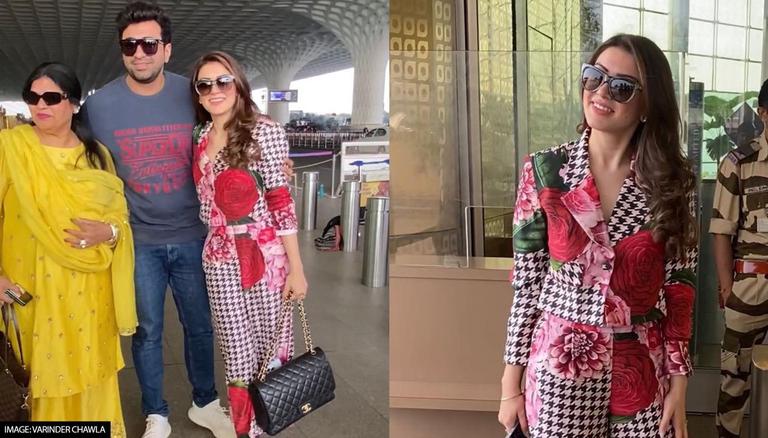 
Hansika Motwani is all set to tie the knot with businessman Sohael Khaturiya, and was spotted leaving for Jaipur with her family ahead of the big day. The couple will reportedly tie the knot on December 4 at a palace, while the sangeet and mehendi ceremonies will be held a day ahead of the wedding. Hansika also recently celebrated her bachelorette with her girl squad, glimpses of which were shared by the actor on social media.

In videos shared by paparazzi handles, Hansika was seen at the Mumbai airport with her mother as they headed to Jaipur. The Koi Mil Gaya actor was dressed in a floral co-ord set with black boots and a black bag, accentuating her look with sunglasses. Take a look.

Days ago, Hansika took to Instagram and shared a video montage of her all-girls bash. The actor and her friends were seen posing in silk robes, enjoying partying, and visiting scenic locations among other things. "Best bachelorette ever. #blessed with the #best," she wrote in the caption.

READ | Hansika Motwani to tie the knot on Dec 4; know all about her glitzy wedding festivities

According to a Hindustan Times report, the couple will get married in Jaipur on December 4, while mehendi and sangeet ceremonies will be held on December 3. Other events like a polo match, casino-themed party, and sufi night have also been planned for the guests. The pre-wedding festivities kicked off with a mata Ki chowki function in November. Hansika earlier shared photos from her dreamy marriage proposal in Paris, where Sohael was seen on his knees, presenting a ring to the actor. "Now and Forever," Hansika captioned the post.