Makers of Suriya's upcoming courtroom drama 'Jai Bhim' revealed the film's new poster along with its trailer launch date of October 22, 2021. Read on. 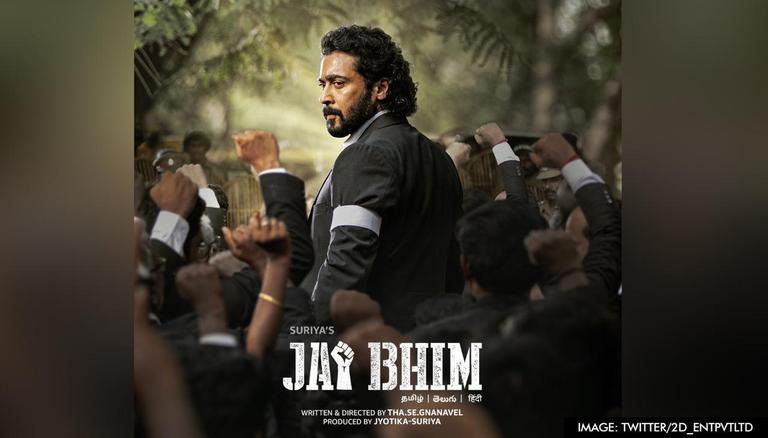 
The makers of Suriya's upcoming legal thriller Jai Bhim have unveiled the film's latest poster along with the trailer release date. The highly anticipated courtroom drama showcases the actor as an upright lawyer who aims to protect the rights of the oppressed. The newly launched poster not only portrays Suriya in an impactful avatar as he stands out from the crowd but also unveils the trailer launch date of October 22.

The announcement comes days after the film's teaser launch, which was filled with hard-hitting dialogues and a strong didactic message as Suriya's Chandru tries to secure legal justice for people from the Scheduled Tribe.  Written and directed by TJ Gnanavel, the film also stars Prakash Raj as a cop, Lijomol Jose as a tribal woman as well as Ramesh Rao, Rajisha Vijayan, and Manikandan in supporting roles.

Taking to their official social media handle on Wednesday, October 20, Suriya's production firm 2D Entertainment revealed the intense poster and wrote," We cannot wait for justice to overpower injustice! Trailer out on Oct 22". Streaming giant Amazon Prime video also unveiled the trailer date with an interesting caption that read," A verdict is all that is needed to make the tables turn!  Will @Suriya_offl make it happen?".

We cannot wait for justice to overpower injustice!
Trailer out on Oct 22.

Meanwhile, the film's teaser was released on the occasion of Dussehra on October 15, along with which the actor penned a note stating, "I strongly believe true stories can bring true changes in the society...#JaiBhim will be an intense one and is close to my heart!!" (sic). The film narrates the story of Senggeni and Rajakannu, whose lives topple after Rajakannu is convicted by the police due to an untoward incident and later goes missing from the police station. Suriya drops in to aid Senggeni, who is out to seek justice for her husband.

The film will witness a digital premiere on Amazon Prime Video ahead of Diwali, on November 2. It will be released in five languages - Tamil, Telugu, Malayalam, Kannada, and Hindi. Meanwhile, Suriya will also be seen in Oh My Dog, co-starring Arnav Vijay, Arun Vijay, Vijay Kumar, Mahima Nambiar, and Vinay Rai.