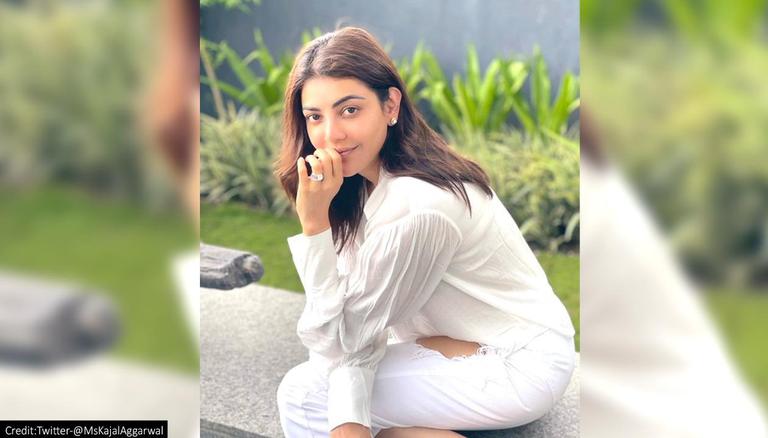 
Kajal Aggarwal is currently busy with several projects in her pipeline. She has revently unveiled the first look of her upcoming flick Karungaapiyam, on her official Twitter handle. The first look of the film features four female leads - Kajal, Regina Cassandra, Janani and Raiza Wilson. In the poster, the female lead actors can be seen flashing proud smiles as they look ahead. As the South Indian diva unveiled the poster of her upcoming horror drama, she simply tagged her co-actors and the director of the film.

In the poster, Kajal Aggarwal can be seen sporting traditional avatar wearing a purple saree. She wore subtle makeup and several pieces of gold jewellery made her look classy. Regina, Janani and Raiza can be seen in their casual avatar and posing along with Kajal with confident smiles.

As the Singham actor unveiled the first look of her upcoming flick, her fans were quick to express their excitement in the comments section. Several reposted the film's poster on their Twitter handle and dropped positive comments. A fanpage tweeted, "Can't wait for it" with a pair of heart-eyed face emoticon. Another one chipped in, "So beautiful". A netizen complimented the title and wrote, "Nice title" with shining star emoticon. A Twitter user penned, "Wow I am so excited".

READ | Kajal Aggarwal's birthday: Can you guess Kajal's co-star based on her film's plot?

Can't Even Wait Your Upcoming 😍🔥🔥

Wow I am so excited

Very excited for this one ✴️💥💥💥
Mam you never ever done this type of role before @MsKajalAggarwal🤩🤩#KajalAggarwal pic.twitter.com/hHs5vMoqWx

Karungaapiyam is helmed by Yaamirukka Bayamey, and Kavalai Vendam fame, Deekay. Speaking to New Indian Express, Deekay revealed that the film is a horror flick and roughly translates to "dark tales". Deekay stated that the upcoming period drama will have different genres of horror, unlike his previously released, Yaamirukka Bayamey, that was a horror comedy and Kaatteri, which was a fairytale based horror comedy.

Karungaapiyam also features Kalaiyarasan, Yogi Babu, Karunakaran, John Vijay, Sha Ra and Lollu Sabha Manohar. The film is shot in and around Chennai, Udumalaipettai, and Pollachi. The upcoming horror tale is jointly bankrolled by Vetrivel Talkies, Pave Entertainments, and AP International. The musical score has been taken care of by Prasad SN, while Vignesh Vasu is the cameraperson.

Moreover, Kajal Aggarwal tied the knot with the love of her life, Gautam Kitchlu in an intimate ceremony in Mumbai on October 30, 2020. The couple dated for three years before getting married. Since then, Kajal 's Insta handle is filled with pictures featuring herself and her husband.

READ | Kajal Aggarwal to get her highest pay cheque till date for movie 'Uma': Reports

A peek into Kajal Aggarwal's photos

WE RECOMMEND
Kajal Aggarwal to get her highest pay cheque till date for movie 'Uma': Reports
When Kajal Aggarwal was compared to a younger version of Sushmita Sen by Randeep Hooda
Anushka Shetty shares message on spreading love, Kajal Aggarwal reacts
Raiza Wilson's botched cosmetic procedure: Timeline of what happened with the actress
Did Raiza Wilson reveal an intimate photo with her boyfriend on Instagram?