Kamal Haasan and his 'Vikram' team posed in style as they took another step towards the finishing line. Netizens react to the Twitter post. 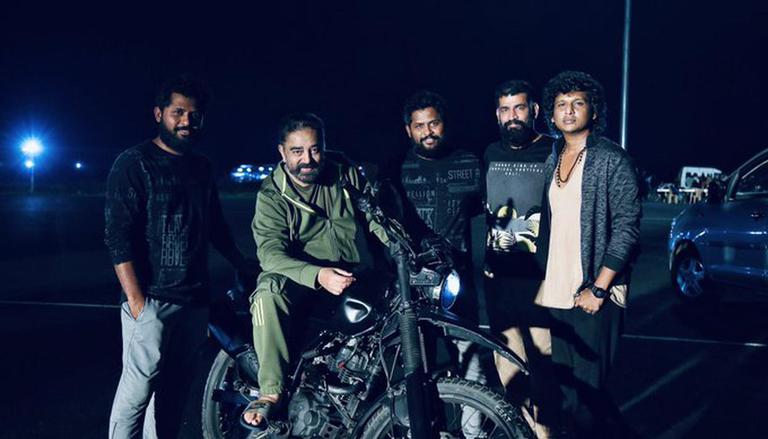 
The shooting of Vikram seems to be going forward at a good pace. The team of the Kamal Haasan-Vijay Sethupathi-Fahadh Faasil movie completed the second schedule recently and were delighted over another step towards the completion. Filmmaker Lokesh Kanagaraj dropped a stylish photo of Kamal Haasan along with the other members of the team.

Kamal Haasan was without his lead co-stars Vijay Sethupathi and Fahadh Faasil as the second schedule wrapped up. However, the other members of them including the captain of the ship himself were there with him. The veteran actor, who is also the producer of the movie, was sitting on a motorcycle.

Lokesh used a flash emoji to suggest that the shoot went well on course as per the schedule and used hashtags like 'Vikram second schedule' and 'Vikram'.

Netizens had different kinds of reactions to the post. Some were curious to know about the release date. A few believed that there were four schedules that were to take place.

Some expressed their excitement by calling Kamal Haasan 'Thalaivaa'. One expected bike stunt sequence, looking at the Indian 2 star's vehicle.

Kamal Haasan and co had unveiled the first look of the movie in July this year. This was days after the conclusion of the Tamil Nadu Assembly elections, in which the actor-director's Makkal Needhi Maim party could not win a seat, with Haasan also losing out in a close-fought contest. “Only valour should wear the crown. I dare again to render before you the best of our talents. Like before, grant us victory!![sic]," Haasan had said as he shared the bearded looks of the lead trio in black-and-white. The movie had kicked off with a pooja ceremony later than a month. At that time, Vijay Sethupathi was snapped, but Fahadh Faasil was not seen.

Day one of VIKRAM. Felt like a High school reunion.
In the past 50 years this is the longest I have been away from film shootings. Many film makers have not seen action for nearly a year. (1/2)https://t.co/WTM7mqHKia

The trio, known for their acting skills, is yet to come together on the same platform. The movie also stars actors from the Malayalam film industry. This includes Kalidas Jayaram, son of veteran actor Jayaram. The other actor is Narain.