Kamal Haasan is all set to present these short stories on Netflix, even though he won't be acting or directing in the anthology starring Mohanlal and others. 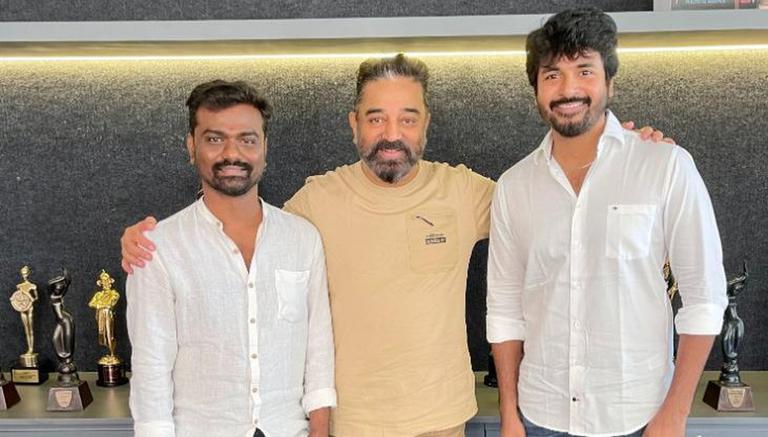 
Kamal Haasan, on Saturday, took to Twitter and announced that his company, Raaj Kamal Films International is collaborating with Sony Pictures Films India for their upcoming production, Thampi. The film will star actor Sivakarthikeyan, who has films like Doctor, Remo, Hero, and Don under his credits, in the lead role and will be helmed by filmmaker Rajkumar Periasamy, who is known for 2017's release Rangoon. The team of the production house welcomed the actor and the director on board.

The production house team tweeted, "We are stoked to be collaborating with Sony Pictures Films India for our next Production. Welcoming Sivakarthikeyan and Director Rajkumar Periasamy on board! #KamalHaasan #WelcomeSivakarthikeyan @ikamalhaasan @Siva_Kartikeyan @Rajkumar_KP  #Mahendran @RKFI @sonypicsfilmsin."

We are stoked to be collaborating with Sony Pictures Films India for our next Production. Welcoming Sivakarthikeyan and Director Rajkumar Periasamy on board! #KamalHaasan #WelcomeSivakarthikeyan@ikamalhaasan@Siva_Kartikeyan@Rajkumar_KP#Mahendran@RKFI @sonypicsfilmsin pic.twitter.com/wjDdaaXzLE

Kamal Haasan also posted the same pair of pictures and penned a long note in his native language, Tamil. The note roughly translates, "Some jobs bring happiness; Gives some dignity and pride. @sonypicsfilmsin & RKFI Co-produced by this film, Thampi is looking for pride for everyone IvaSiva_Kartikeyan, Director Rajkumar_KP Glad to travel with young people like. Congratulations to both (1/2)." In his thread, Haasan further tagged the cast and crew members of the next project under Kamal Haasan productions.

Sivakarthikeyan also expressed his excitement for his next film under Kamal Haasan productions. He tweeted, "Excited to join with two strong forces of cinema, Ulaganayagan @ikamalhaasan sir and SonyPicsFilmsin. Thanks to my friend Director Rajkumar_KP for making this happen. Hugging face @vivekkrishnani #RMahendran sir. (sic)"