'Lots of love' Kamal Haasan Turns 67: Shruti Haasan Looks Back At Childhood Days While Wishing Him 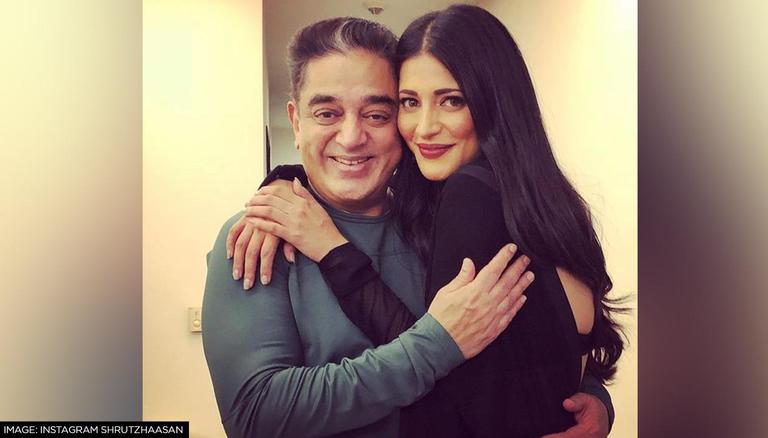 
Veteran actor Kamal Haasan ringed in his 67th birthday on November 7 and received heartfelt birthday wishes from his daughter Shruti. The Gabbar Is Back star took a stroll down memory lane and shared a throwback picture while thanking her father for everything he has done for her and her sister Akshara Haasan.

In the throwback picture, little Shruti can be seen in a playful mood while posing with her father and superstar Kamal. In the caption, she wrote, “HAPPY BIRTHDAY!! @ikamalhaasan may this year and many more to come be filled with your signature brand of joy, magic, and artistry lots of love, and can’t wait to see the incredible things you have in store for us !!!”

Kamal Haasan has been honoured with Padma Shri and Padma Bhushan for his contribution to cinema. Kamal is a recipient of the Kalaimamani award, which is the highest civilian honour in Tamil Nadu.

Long back in an interview with Hindustan Times, the actor talked about his critically acclaimed film Mahanadi, a Tamil crime drama released in 1994. Kamal has not only acted in Mahanadi but also written the story and screenplay. In the movie, the lead actor's daughter is kidnapped and sold off as a sex worker. Kamal wrote Mahanadi when he learned that his household help was plotting to kidnap his daughter. Kamal recalled that his household help conspired to kidnap his daughter for ransom and they even ran a dry run then, but later he discovered their plan.

Meanwhile, ahead of the legendary actor’s birthday, he dropped his first look from his upcoming actioner tilted Vikram. The hype around the film has increased tenfolds with the new video shared by the makers providing a look into the veteran actor's pensive and strong character. Taking to his Instagram on Saturday, November 6, the 66-year-old actor unveiled his new look from the forthcoming action flick Vikram. In the poster, Haasan can be seen wielding a gun in his hand as a massive fire explosion surrounds him. Apart from Vikram, the veteran actor has a couple of movies in his kitty namely Indian 2, an action thriller directed by S. Shankar. He is also in talks to appear in the movie Dasavatharam 2.0.

WE RECOMMEND
'Vikram' makers drop first glimpse of Kamal Haasan in action film ahead of his birthday
Shruti Haasan gives a glimpse of her perfect Diwali celebration with Santanu Hazarika
Kamal Haasan's 3D printed statue to be released via balloon satellites as birthday tribute
Shruti Haasan shares thoughts about being in love; says it's 'the best feeling'
Shruti Haasan celebrates sister Akshara's b'day with father Kamal Haasan; shares pictures
Listen to the latest songs, only on JioSaavn.com