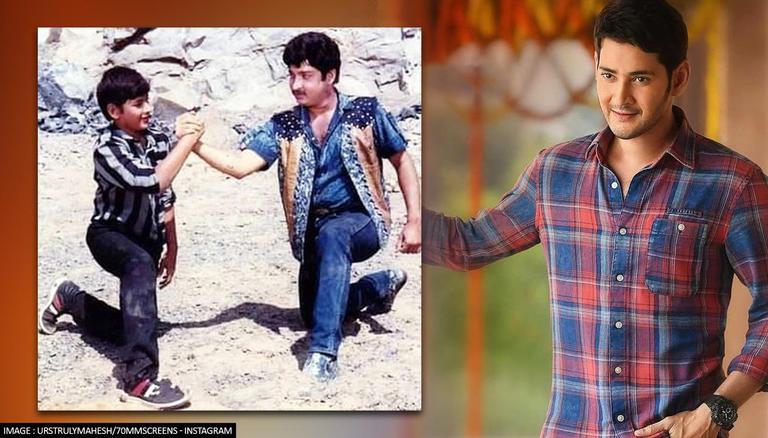 
Telugu actor Mahesh Babu’s elder brother, Ramesh Babu, is celebrating his birthday today. On the special occasion, the actor extended his greetings with a special throwback picture from his childhood. Mahesh has shared screen space with his brother in his childhood for the movie 'Needa'. Mahesh took to Instagram and penned a sweet note along with the picture that also features their father Krishna.

Mahesh and his brother Ramesh were all smiles in the picture. Captioning the post, he wrote, "One of my biggest influences.. he's someone I've always looked up to! Wishing my Annaya a very happy birthday!! Health and happiness always."

The actor finally decided to end his career by taking retirement in 1997 and had done 15 films until then. In 2004, he became a producer and started Krishna Productions Private Ltd, a film production company named after his father. Mahesh Babu produced films like Arjun, Athidhi, and Dookudu, which had him in the leading role.

Meanwhile, Mahesh Babu was previously in the news after the South Indian International Movie Awards. Mahesh Babu took home the Best Actor award for Maharshi. The film's director, Vamshi, won the Best Director award. Allari Naresh also won the Best Actor in a Supporting Role award for the film and the music director too grabbed an award. On the work front, he has been busy shooting for director Parasuram Petla's Sarkaru Vaari Paata in Hyderabad.

The film marks the first collaboration of Mahesh Babu with National Award-winning actor Keerthy Suresh. Bankrolled by Mythri Movie Makers, GMB Entertainment, and 14 Reels Plus banners, the film is set to hit theatres on January 13, 2022.

In the Parasuram directorial venture, R Madhi is the cinematographer, Marthand K Venkatesh is the editor, whereas AS Prakash is the art director. The film is reportedly set to clash with Pawan Kalyan's Bheemla Nayak and Prabhas' Radhe Shyam.

WE RECOMMEND
Mahesh Babu fans celebrate as ‘Dookudu’ clocks 10 years on September 23
'Will our daughters ever be safe?': Mahesh Babu on Hyderabad sexual assault case
‘Excited’ Mahesh Babu reveals his next project with SS Rajamouli is going to be 'massive'
Taapsee Pannu's 'Looop Lapeta', Mahesh Babu's 'Major', 15 other films to release next year
PM Modi turns 71: Mahesh Babu, Pawan Kalyan, other South Indian celebs wish PM on b'day
Listen to the latest songs, only on JioSaavn.com