Mahesh Babu-Tamannah's reunion on a project being helmed by 'Arjun Reddy' fame Sandeep Reddy Vanga excited fans. The latter had a cute message for Sitara.

It was way back in 2014 that Mahesh Babu and Tamannaah Bhatia had shared screen for the first time in Aagadu. While a full-fledged reunion on film might not have taken place, they have collaborated on two projects after a gap of six years. After a dance number in Sarileru Neekevvaru, they once again came together for an advertisement shoot.

Another highlight of Mahesh Babu and Tamannaah's collaboration was that they were working with Arjun Reddy fame Sandeep Reddy Vanga. Pictures from the shoot surfaced on social media when the lead pair were dressed casually. Netizens shared their excitement and called it a ‘treat to watch.’

Earlier, Bharat Ane Nenu star’s wife, Namrata Shirodkar had shared pictures from the sets and termed it as ‘fun shoots.’

Tamannaah spent some with the star couple’s daughter Sitara. Posting a snap with her, the Baahubali cutely asked the little one to ‘not grow up fast.' 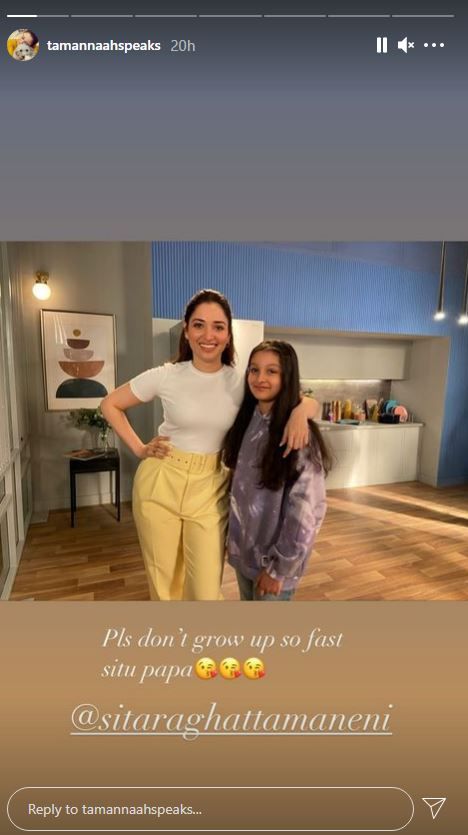 The star kid also posted the picture and termed it as the ‘perks of being on-set’ with her father.

Recently, the star kid had posted another moment with an actress, wishing Alia Bhatt on her birthday on Monday.

Meanwhile, Mahesh Babu is currently working on the movie Sarkaru Vaari Paata. The movie is slated for release on Sankranti in January 2022. Before that, his production Major starring Adivi Sesh on life of late Major Sandeep Unnikrishnan will hit the screens on July 2.

Tamannaah kicked off te movie Gurtunda Seethakalam on Valentine’s Day. Among other films in her kitty include the sequel of F2, titled F3.