Ananya Pandey took to her Instagram and shared a photo with Mike Tyson from the sets of their movie 'Liger' as they recreated the infamous 'bite fight'. 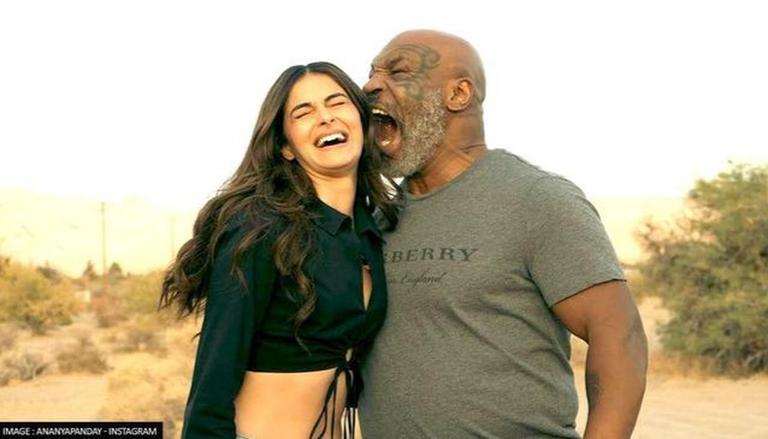 
Boxing legend Mike Tyson will soon be seen in the sports action film Liger alongside Ananya Panday and Vijay Deverakonda. Ananya recently shared a picture of herself with Tyson as they recreated his infamous 'Bite Fight'.The photo has been creating a buzz amongst netizens as the 'Bite Fight' was one of the most controversial matches that the former wrestler took part in during his career.

Ananya Pandey and Mike Tyson have been shooting for their upcoming action movie Liger. Ananya recently took to her Instagram and shared a picture with Mike from the sets of the movie. Tyson was seen biting Ananya's ear as he posed alongside her, recreating the former boxer's controversial 'Bite Fight' move. As she shared the picture, the actor wrote, " We’re clearly getting along really well."

Meanwhile, 'Bite Fight' marks one of the most infamous matches in the history of modern sports. The match took place on June 28, 1997, and ended with Tyson biting off a part of his opponent and world champion Evander Holyfield’s ear. The first time Tyson bit him, the match was temporarily stopped. Referee Mills Lane deducted two points from Tyson and the fight resumed. However, after the match resumed, Tyson bit him again, resulting in his disqualification, and Holyfield won the match. The first bite was severe enough to remove a piece of Holyfield's right ear, which was found on the ring floor after the fight. Tyson later stated that his actions were retaliation for Holyfield repeatedly headbutting him without penalty.

The action flick stars Vijay Deverakonda and Ananya Panday while Mike Tyson is set to make his acting debut in the Indian film industry through the movie. Apart from the lead cast, the film also stars Ramya Krishnan, Ronit Roy, Ali, Makarand Deshpande, Getup Srinu, Abdul Quadir Amin, and several others in key roles. The movie has been shot simultaneously in Telugu and Hindi and will mark Ananya's debut in the South Indian film industry.

Besides directing the sports thriller, Puri Jagannadh will also be producing the film under his home banner Puri Connects. Actor-turned-producer Charmme Kaur is also part of the production. The technical crew of the movie includes music composer Mani Sharma and editor Junaid Siddiqui while Vishnu Sharma is in charge of handling the cinematography.