Many celebrities have posted the videos of them recreating popular songs from the olden times and shared them on social media for the entertainment of their fans. Namrata Shirodkar has also posted one such recreated video, which shows an old and popular song that her grandmother Meenakshi Shirodkar starred in, featuring her daughter Sitara. Sitara is seen copying Meenakshi’s actions inside a pool from her song Yamuna Jali Khelu Khel. The video was posted originally by Sitara herself, which was then reposted by Namrata.  The actor expressed her pleasure with the video in the caption, which was also followed by praises from her fans.

The video shows the original and recreated video beside each other. It starts off as both of them step inside a pool. Sitara is seen recreating her great grandmother’s actions quite accurately, with striking similarities between their hand gestures and they way they spin around in the water. Sitara wrote in the caption of her own video, “On the left is my great grandmother Ms. Meenakshi Shirodkar.. and here's my attempt at recreating one of her most iconic songs 'Yamuna Jali Khelu Khel' .. Hope I did it justice 💃😇 She was the best”.

On the other hand, Namrata wrote on her own post, “My favourite women”. The video has thus been posted on the occasion of International Women’s Day, which falls on March 8. Namrata’s fans on social media immediately took to the comments section to praise Sitara. They observed the accurate recreation of Meenakshi’s body language that was made by Sitara and sent their wishes for both of them. Many even reminisced the old but popular song that they performed on, and how it is still listened to by many. 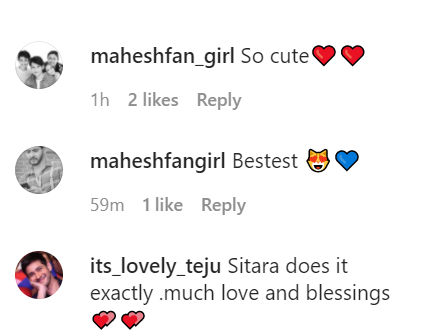 Meenakshi Shirodkar worked in quite a few films in her acting career, including Brahmachari, Badi Maa, Mere Huzoor, Raj Tilak and many more. Namrata Shirodkar also worked in a handful of popular films, including Vaastav: The Reality, Hera Pheri, LOC Kargil and others, before eventually marrying Mahesh Babu. The couple went on to have two kids, Sitara and Gautham.