Actor Pooja Hegde recently took to her Instagram handle and posted a heartfelt note on the demise of her favourite teacher in school. Read further ahead.


Pooja Hegde recently dropped in an emotional note on social media when she received the news of her teacher passing away. She beautifully talked about her teacher’s kindness and mentioned that with her demise, the world had lost a gem. She even thanked her for shaping her into who she was today. 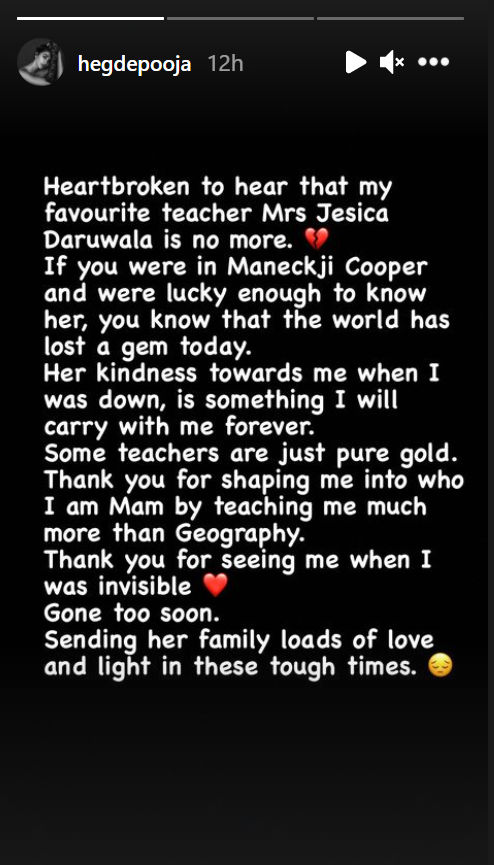 Pooja Hegde recently took to her Instagram handle and shared an emotional note in which she stated that she was heartbroken to hear that her favourite teacher, Mrs Jesica Daruwala was no more. She then recalled the time when she was in Maneckji Cooper and stated that they were lucky enough to know the teacher and mentioned how the world had lost a gem today. She then praised her teacher by saying that her kindness towards her when she was down was something that she will carry with her forever.

Pooja Hegde then mentioned that some teachers were just “pure gold” and thanked her for shaping her into who she was and teaching her much more than Geography. She even thanked her for seeing her when she was invisible and stated how she had gone too soon. In the end, she sent her family loads of love and light in the tough times and added a sad face emoji in the end.

READ | Pooja Hegde shares throwback pic from Austria: 'There was so much we took for granted' 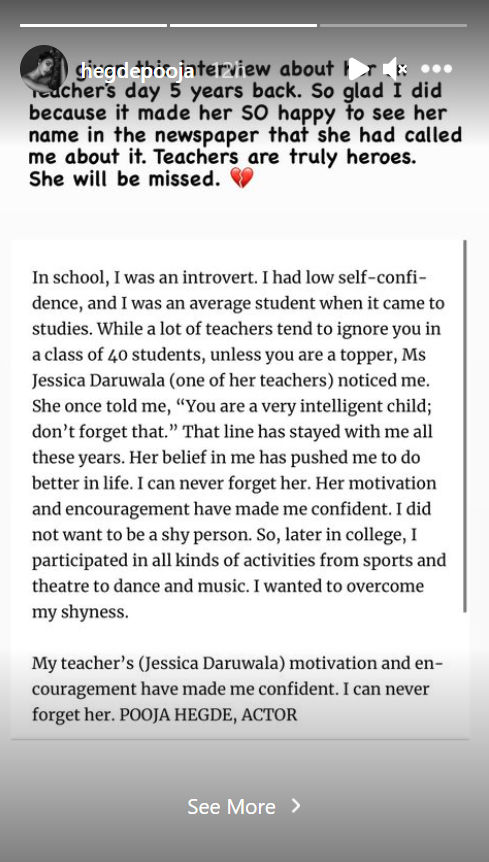 Pooja Hegde even shared her interview from about 5 years ago on the occasion of Teacher’s Day and stated that she was so glad to see her name in the newspaper. In the interview, the actor had revealed how she was an introvert in school having low self-esteem. She had also mentioned that she was an average student when it came to studies and how her teacher, Jessica Daruwala, had noticed her while a lot of teachers tended to ignore one in a class of 40. The actor had stated how she told her not to forget that she was an intelligent girl and added that the line had stayed with her all these years. She had further shared that the teacher's belief had pushed her to do better in life and had added how she could never forget her as her motivation and encouragement had made her confident.