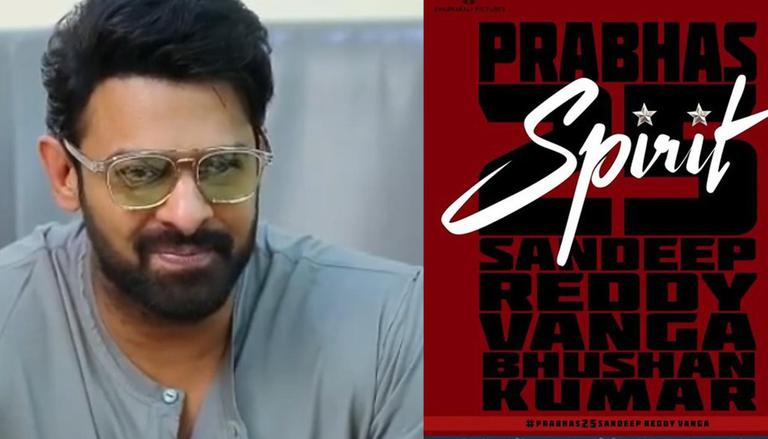 
The Bahubali star Prabhas is one of the A-listers of the entire Indian film industry. The actor has a number of films lined up for release. While fans have been waiting for Prabhas starrers, the actor recently announced his collaboration with Arjun Reddy director Sandeep Reddy Vanga for his 25th film.

Prabhas25 trended on Twitter as soon as the actor teased his 25th project. Taking to social media, Prabhas recently unveiled his upcoming film, Spirit. Directed by Sandeep Reddy Vanga, the film is being bankrolled by Bhushan Kumar, T-Series films, and Bhadrakali Pictures. Sharing the dramatic poster, Prabhas wrote, "Kickstarting my journey with SPIRIT. Directed by @sandeepreddy.vanga and produced by Bhushan Kumar @tseriesfilms & BhadrakaliPictures!". The film's announcement created a buzz among the Bahubali star's fans. They showered him with love and revealed they could not wait for the film.

Why Spirit is extra special for Prabhas?

As per a report by Bollywood Life, Prabhas' team had earlier confirmed that his new film is extra special for him. Prabhas chose October 7, 2021, to announce his new venture as he marks his 25th movie in the film industry on this date. Prabhas made his acting debut in 2002 and has been in the film industry for nearly two decades. Details about the cast and release date of the film are still under wraps.

Prabhas on the work front

Prabhas is one of the busiest actors in the film industry. He is currently gearing up for the release of his four upcoming films. Here are the details about Prabhas' most-awaited films.

Prabhas will star in the upcoming drama historical film alongside Pooja Hegde. After seeing several postponements, the film is now scheduled to release on January 14, 2022. It is being helmed by Radha Krishna Kumar, while Bhushan Kumar, Vamsi, Pramod, and Praseedha are jointly bankrolling it.

The action-thriller film will see Prabhas, Shruti Haasan, and Jagapathi Babu in the lead roles. The film is being directed by Prashanth Neel. It will debut in theatres on April 14, 2022.

Prabhas plays the lead protagonist, while Saif Ali Khan will portray the main antagonist in the upcoming mythological film, Adipurush. The film also cast Kriti Sanon as the leading lady and Sunny Singh in a pivotal role. Adipurush is set to release on August 11, 2022.

READ | Prabhas to team up with 'Arjun Reddy' director Sandeep Reddy Vanga for his 25th film?

Apart from these, Prabhas also has the film Project K in his pipeline. The actor will co-star Amitabh Bachchan and Deepika Padukone in the upcoming movie. Its Bhoomi Poojan took place on July 24 this year.

WE RECOMMEND
Prabhas to team up with 'Arjun Reddy' director Sandeep Reddy Vanga for his 25th film?
Prabhas to announce new film as he completes 25 years in industry on October 7?
Ranbir Kapoor to commence shoot for Sandeep Reddy's 'Animal' from Summer 2022
Prabhas' doting b'day wish for 'Adipurush' co-star Sunny Singh; 'Had lots of fun on sets'
Prabhas and Pooja Hegde's period drama 'Radhe Shyam' to stick to the original release date
Listen to the latest songs, only on JioSaavn.com