Taking to Instagram, Prithviraj Sukumaran recently wished the prolific actor, Mammootty on his birthday and uncovered an unseen picture of them together. 
On the occasion of Mammootty’s birthday, many of the artists from the entertainment industry have been sending best wishes to the actor one of which includes Prithviraj Sukumaran. The actor recently shared a memorable picture of himself with Mammootty and penned a sweet birthday note for the latter in his latest social media post.

Prithviraj Sukumaran recently took to his official Instagram handle and shared an unseen picture of himself with the legendary actor, Mammootty. In the picture, he can be seen wearing a black and white floral print shirt while Mammootty can be seen sporting a colourful shirt with his hand on Sukumaran’s shoulder.

Prithviraj Sukumaran’s tribute to Mammootty on the latter’s birthday

Prithviraj Sukumaran in the caption, complained to Mammootty that they do not have more pictures together and expressed his feeling about how much he meant to him. He wrote, “I don’t have a better photo..coz we always forget to take one on those biriyaani and black tea afternoons. But you have no idea how much you mean to me like you do to a zillion other dreamers and aspirants. And more than anything else, thank you for Chaalu and Surmi chechi! I love you..the world loves you! Happy birthday Ikka!” (sic)

Numerous fans took to Prithviraj Sukumaran’s Instagram post and showered hearts on his post while many others wished the legendary actor, Mammootty on his birthday. Many of them also added heart-eyed emojis in the comments section to depict how amazed they were after seeing this unseen picture of them. Take a look at some of the fans’ reactions to Prithviraj Sukumaran’s latest Instagram post. 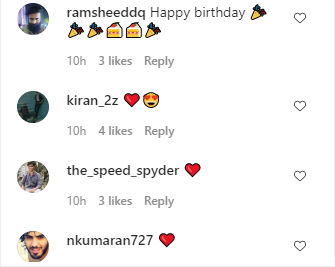 Prithviraj Sukumaran recently wrapped up his second directorial movie, Bro Daddy and shared a note of gratitude to all his team members. In the caption, he stated, “It’s been such a joy to watch him have so much fun in front of the camera! Thank you cheta @mohanlal, #AnthonyPerumbavoor for having so much faith and conviction in me, thanks to a fantastic cast, and a superb crew! #BroDaddy” (Sic)