Shreyas Talpade revealed his association to Allu Arjun's 'Pushpa: The Rise Part 01' in a video and told fans, 'thank you for the love'. 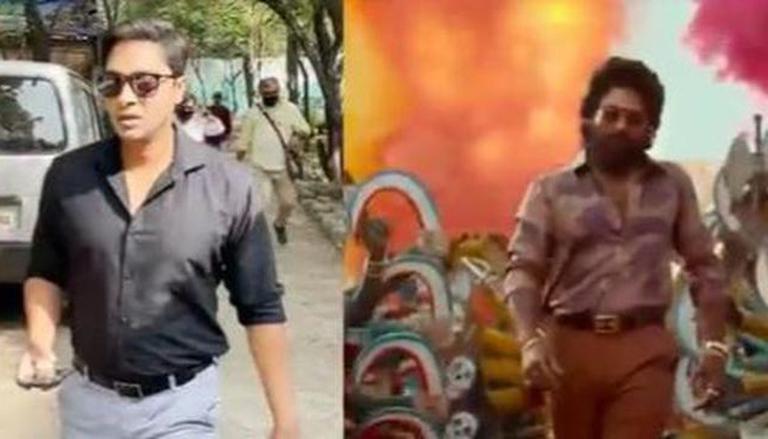 
Pushpa: The Rise Part 1 has been among the newsmakers over the past couple of days as it hit the theatres. While the film recorded impressive collections, the performance of the lead actor Allu Arjun is being talked about and creating a frenzy among his fans. Even Akshay Kumar took note of the Telugu film, being released in multiple languages, and expressed a desire to watch it soon.

However, Akshay is not the only Bollywood actor to be talking about the action film. In fact, one actor even worked in the movie. Shreyas Talpade has lent his voice for the Hindi version of the film.

Shreyas dropped a video on social media to express his gratitude for the praises coming his way for his dubbing for Allu Arjun. In the video, the Iqbal star could be seen arriving for the dubbing and then displaying intensity with the microphone on.

He could see heard delivering one-liners like 'hum sab apni ladai lad rahe hai' (We all are fighting our battles), 'Pushpa naam sunke kya flower samjhe? Fire hain main, (Do you think Pushpa meant flower? I am fire)  'mai jhukega nahi ( I won't bow down) while Allu Arjun acts on the screen and said his lines in Telugu.

In the caption, Shreyas wrote that he was 'beyond happy' with the response he had received for his voice in Pushpa Hindi. Thanking netizens, he urged them to continue showering love on him.

The 45-year-old also hailed Allu Arjun for his 'record tod dhamaka' (record-breaking celebration). He added that in the same way as Pushpa won't bow down, the 'blockbuster numbers' for the film, in terms of collections, would continue.

READ | Pushpa star Rashmika Mandanna details struggles of being an actor; says 'It hurts so bad'

Shreyas had shared some days ago that he was 'extremely happy & honoured' to be the voice of Allu Arjun, whom he termed as 'India’s Most Powerful & Stylish actor'.  He added that he had tried to do justice to Allu Arjun's 'phenomenal hardwork' in his own little way.' This was his second Hindi dub after Lion King.

Previously, a known actor, Sharad Kelkar recording voice for a Telugu film, being released in multiple languages, for Prabhas in Baahubali, had similarly become a talking point.