Makers of Allu Arjun, Rashmika Mandanna starrer 'Pushpa' have released the promo clip of their second song 'Srivalli'. It will be released on October 13. 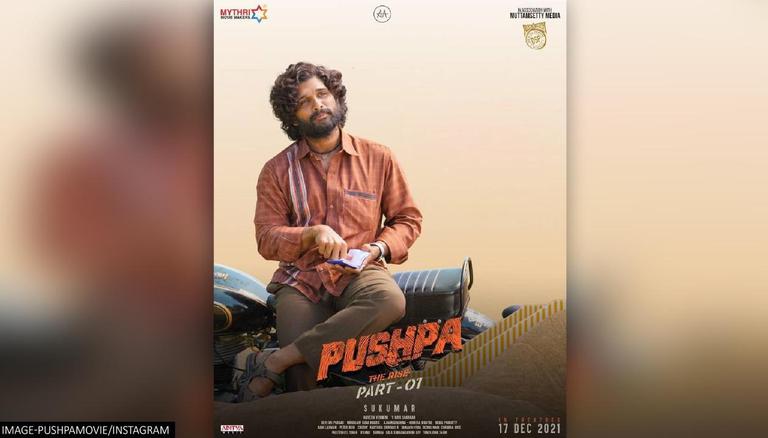 
After the release of the first song, Daakko Daakko Meka, makers of Allu Arjun and Rashmika Mandanna's upcoming film, Pushpa, have dropped a promotional teaser of its second song Srivalli. The song, which is all set to be released tomorrow, October 13, has been crooned by Sid Sriram, while the lyrics are penned by Chandrabose. The film's music score has been composed by Devi Sri Prasad. Taking to Pushpa's official Twitter page, the makers also revealed that the 'magical melody' of Srivalli will be premiered tomorrow at 11:07 am. The film is being made in two parts, with the first instalment titled Pushpa: The Rise set to hit the big screens on December 17, 2021. It will witness a pan India release in five languages: Telugu, Tamil, Malayalam, Kannada, and Hindi.

Releasing the song's promotional teaser on the film's Twitter handle, the makers wrote," The magical melody #Srivalli from #PushpaTheRise will be a lovely addition to your playlist from tomorrow @ 11:07 AM". Rashmika Mandanna takes on the role of Srivalli in the film. Take a look at the 20-second clip, which has been released in five languages.

Crooned in the other four versions by Sid Sriram, its Hindi version has been sung by Javed Ali. Apart from the leading duo of Allu Arjun and Rashmika, the film also stars Fahadh Faasil as the lead antagonist. Actors like Sunil, Dhananjay, Anasuya, Vennela Kishore, Prakash Raj, Deepak Shetty, and Anish Kuruvilla will appear in supporting roles.

The film's release date was announced by the team behind Pushpa: The Rise through their Twitter handle. Sharing the news they wrote, "This December, Theatres will go Wild with the arrival of #PushpaRaj. #PushpaTheRise will hit the Big Screens on DEC 17th. #PushpaTheRiseOnDec17 #ThaggedheLe". Take a look.

READ | ‘Pushpa’ gets new release date ahead of Christmas, averts box-office clash with ‘83’

As per reports, the movie, which is being bankrolled by Mythri Movie Makers and Muttamsetty Media, is based on real-life incidents about red sandalwood smugglers in Andhra Pradesh. It has been directed by Sukumar.

Apart from Pushpa, Mandanna will mark her Bollywood debut opposite Sidharth Malhotra in Mission Majnu, the shooting of which has been wrapped up by her. She will also be seen alongside superstar Amitabh Bachchan in Goodbye. Arjun will be seen in  AA21 and Icon, both scheduled for 2022.