'Qatil Saya', this Hindi dubbed movie was recently aired on Zee Cinema and netizens went on to react to the supernatural horror drama.


Qatil Saya is the 2021 Hindi dubbed version of 2019's Tamil movie titled Iruttu which was directed by V.Z. Durai. The movie features Sundar C., Sakshi Choudhary, and VTV Ganesh in the lead roles. The dubbed version of the movie was recently premiered on April 28, 2021, on Zee Cinema. The supernatural horror drama film revolves around a police officer who along with his wife and daughter relocate to a haunted hill station. After watching the movie, netizens couldn't stop themself from talking about it. They took to their social media accounts to review the horror thriller. Check out Qatil Saya's review.

A look at Qatil Saya's reviews by netizens

Some of the Twitter users went on to talk about how the movie felt like sitting on a horror rollercoaster, whereas other users called it a "decent" horror thriller. Another user went on to review the whole movie and talked about the actor's acting skills in it. Some users did not like the VFX and others gave it 3/5 stars. Check it out.

Iruttu movie first half over

Review : Sitting on a horror coaster

#Iruttu review will say in one word #Merattu 👌

In the line up of #Maya #Aval #DolbyAtmos mixing was detailed and excellent, mix by #Rehamattullah@ggirishh BGM another plus

This is missed to make best horror movie of the year .

its failed only for worst vfx & many logical loopholes.#iruttureview

#Iruttu Review a good horror thriller movie.first half was excellent and second half was lagging .once watchable..3/5 Rating...

As per IMDb, the movie received 5.1 stars out of 10. A user on the platform talked about the movie being "a usual ghost film with a different plot". He said that the movie appeared to be similar to other horror movies and even though the climax was good, overall, it could have been better. Other users talked about the movie being an "average horror flick". He said that the trailer was interesting but the movie was not up to the mark because of the storyline. Some of the users thoroughly enjoyed the film and called it "A refreshing horror flick". Check out the reviews. 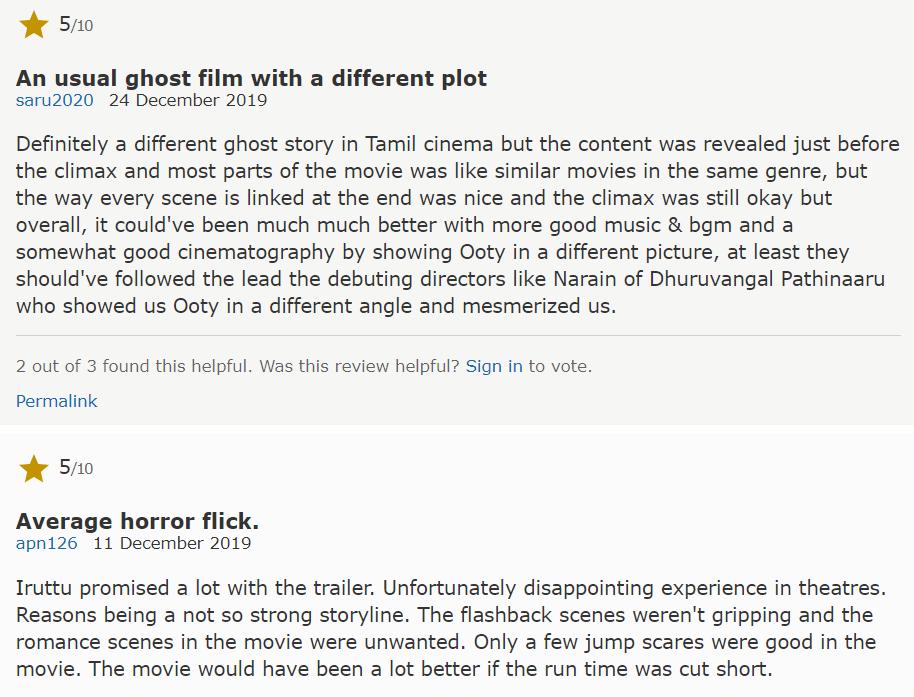 Other details about Qatil Saya

Apart from the lead actors, the movie also features Vimala Raman, Dhanshika, Yogi Babu, and Manasvi Kottachi in supporting roles. The music was composed by Girishh G. while cinematography was handled by E. Krishnasamy. The run time of the movie is 132 minutes. Watch the trailer of Qatil Saya below.