Rashmika Mandanna, who was recently seen in the much-awaited film 'Pushpa' alongside Allu Arjun celebrated hitting a whopping 25 Million followers on Instagram. 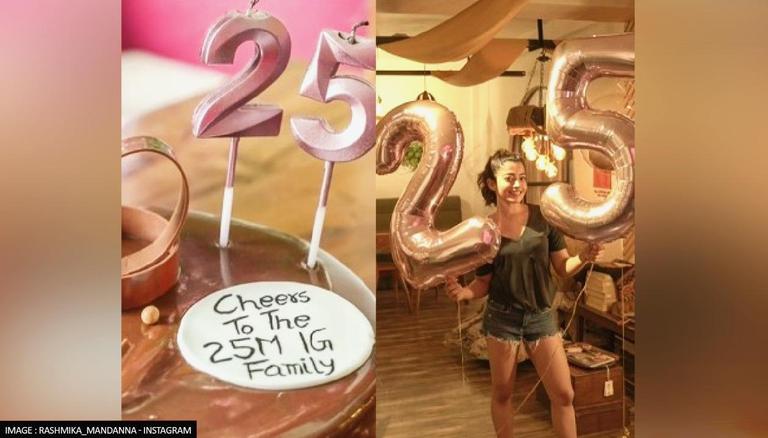 
Rashmika Mandanna, who was most recently seen in the much-awaited film Pushpa alongside Allu Arjun celebrated hitting a whopping 25 Million followers on Instagram. The actor, who has an active social media presence, enjoyed the milestone with balloons and a cake. In the caption of her post, she extended her love to her fans and followers.

Rashmika Mandanna uploaded a reel as she hit 25 Million followers on the social media platform. She was seen in a simple grey t-shirt and denim shorts as she seemed to enjoy her celebration. She then cut a cake that read, "Cheers to the 25M IG family" and also had candles of the number 25 on it. She also had the number 25 rose gold balloons and posed with them as she smiled from ear to ear. The actor is now at 25.8 Million followers and acknowledged the same in her caption. She wrote, "Wait wait wait…..!
Before I forget. 25 M fam.. now 25.8 M fam. we celebrated this.. ❤️😚 I love you. 🌸😚"

The actor often takes to Instagram to share glimpses of her characters and roles on screen. Right from her workout routines to her achievements in the film industry, she shares it all with her fandom online. She also shares glimpses of her dog on Instagram, with who fans have fallen in love.

She was last seen in Pushpa: The Rise, which released on December 17 and was one of the most anticipated Rashmika Mandanna movies. Apart from south films, the actor will soon be seen in the Bollywood industry as well as she has two films in the pipeline. She is gearing up for her role in Mission Majnu alongside Sidharth Malhotra, and will also be seen in Goodbye, in which she will take on a role opposite Amitabh Bachchan. Speaking to ANI about her career in the world of Bollywood, the actor mentioned it has helped her transcend boundaries. She said, "Firsts are always the most special, and Mission Majnu being my first has given me an opportunity to transcend my boundaries and how. My heart feels happy to know that I started my journey in Hindi cinema with this film with these beautiful people."

WE RECOMMEND
Smriti Irani's Instagram post about Mom's slap goes viral; celebrities and netizens react
IT Ministry orders probe after Priyanka Gandhi claims 'govt hacking kids' Instagram'
Instagram rolls out Profile Embed, allows users to insert a mini-profile on websites
Instagram launches Reels Replies: What is the new feature, how to use?
Pushpa star Rashmika Mandanna details struggles of being an actor; says 'It hurts so bad'
Listen to the latest songs, only on JioSaavn.com