Shruti Haasan recently assured her father Kamal Haasan's fans that he is recovering well after being tested positive for COVID-19 and will interact soon. 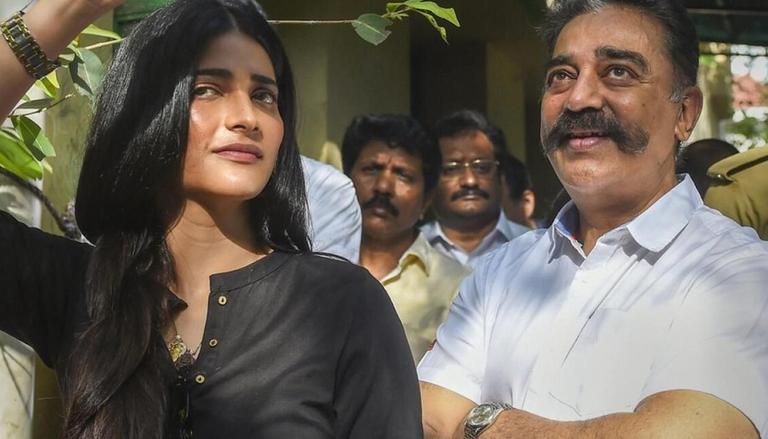 
South actor and Makkal Needhi Maiam (MNM) president Kamal Haasan is currently battling the Coronavirus. The actor had a mild cough after his return from the US and isolated himself when it was confirmed. While his fans have been praying for him for his COVID-19 battle, the actor's daughter Shruti Haasan recently revealed he is doing well and asserted he would interact with his fans soon.

South star Kamal Haasan has millions of fans and well-wishers across the country. The news of him testing positive for COVID-19 spread like a wildfire among his fans who began praying for his better health. Taking to her Twitter handle, Haasan's actor daughter Shruti Haasan recently gave a health update. She thanked Kamal Haasan's fans for their prayers and said the actor is recovering well. The actor wrote, "Thankyou for all your wishes and prayers for my fathers health He is recovering well and is looking forward to interacting with all of you soon!!" Kamal Haasan's fans were relieved with his health update. One of them thanked Shruti and wished the legendary star a speedy recovery and wrote, "Thanks for the update. We all wish him a speedy recovery."

Thankyou for all your wishes and prayers for my fathers health 🙏 He is recovering well and is looking forward to interacting with all of you soon !!

Earlier this week, on November 22, Kamal Haasan released a statement via social media and revealed he had contracted the Coronavirus. The legendary star revealed he witnessed slight symptoms right after his return from the United States. As soon as the test was confirmed, the actor isolated himself. In his tweet, the actor wrote, "I had a mild cough after mu US trip. It is confirmed now that it is COVID. I'm in isolation." The Nayakan star further requested his fans to stay safe and wrote, "I realised that the pandemic is not yet over and request everyone to stay safe."

Later, on the same day, the reports of Kamal Haasan's stable condition came. The actor admitted himself to Shri Ramchandra Medical Centre in Chennai. The hospital officials released a statement and informed the actor's well-wishers that his health was stable.

On the work front, Kamal Haasan will be next seen in the upcoming film Vikram. The film also stars Vijay Sethupathi and Fahadh Faasil alongside the veteran actor. He also has the action thriller Indian 2 in his kitty. It is the sequel to his much successful 1996 film Indian.