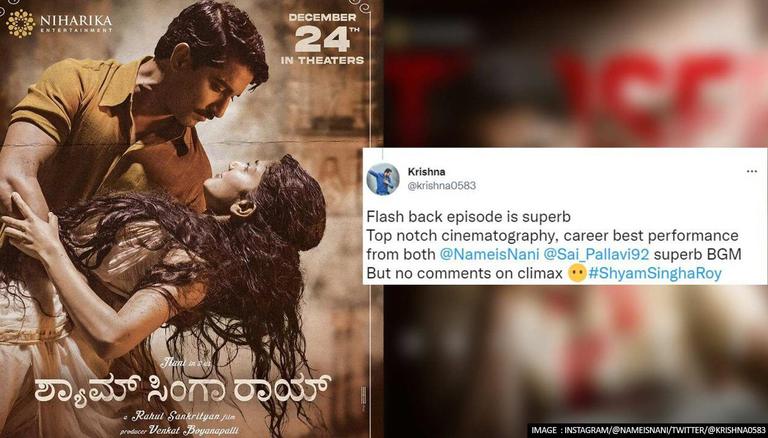 
Following huge expectations of the fans, South Indian actor Nani’s most awaited film Shyam Singha Roy hit the big screens today. This is the first film of the actor to release post the pandemic that has created havoc in the country. Shyam Singha Roy has been getting an incredible response from the cine-goers with many appreciating the actors' efforts.

For the unversed, Nani will be seen playing a double role in the entertainer and has done complete justice to the two characters. Shyam Singha Roy is a commercial thriller in which Nani essays the role of a revolutionary writer and Sai will portray the role of Devadasi.

The trailer of the film was released on 15th December 2021, which starts with Nani's Vasu, an aspiring director, who is striving hard to direct his debut film. Resigning from his software job, Nani's character switched to the filmmaking profession. Nani will also appear as Shyam Singha Roy, a Bengali writer, who falls in love with a Devadasi.

Soon after the release, the excited fans of the actor thronged to Twitter and expressed their love for the film while praising the actors for their impeccable craft. One of the users shared a picture of Nani’s cut out from the film that was placed by fans outside a theatre to support him. Another user praised Nani’s performance in the film and called it a ‘Christmas blockbuster.’ A third user shared a picture from the theatre while expressing his excitement to watch it. Another echoed similar sentiments and wrote, “#ShyamSinghaRoy. Gutsy director & gutsy actor Kudos. Very very bold attempt. Expecting BJP/RSS crybabies to protest against this film.”

The film that hit the cinemas on December 24, 2021, will have a pan-Indian release in Telugu, Malayalam, Kannada, and Tamil. The film has been bankrolled by Venkat Boyanapalli under Niharika Entertainments. Songs have been choreographed by National Award winner Kruti Mahesh and Yash Master. Shyam Singha Roy was earlier scheduled to be released in May 2020 but got delayed due to the COVID-19 pandemic in India. In March 2020, A.R. Rahman was approached to compose music for it but he didn't accept the offer, and later Anirudh Ravichander took charge of composing.