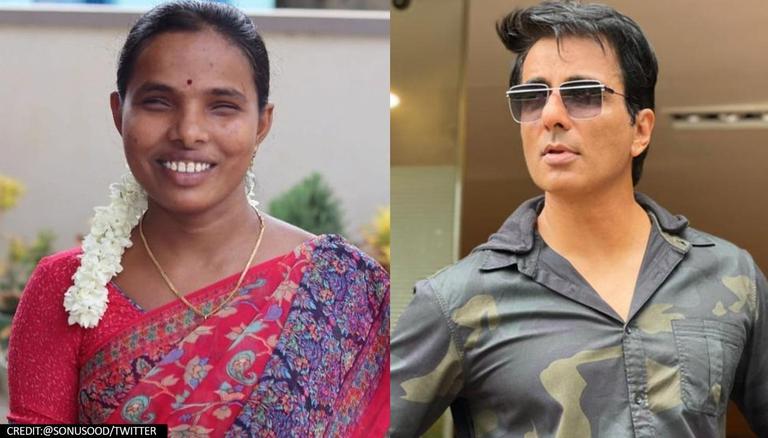 
Actor Sonu Sood, who is hailed as the ‘messiah' for his noble work amid the ongoing pandemic, recently announced that Boddu Naga Lakshmi, a visually impaired woman, will inauguration the oxygen plant set up by his foundation in Andhra Pradesh. Sood will honour Lakshmi for her donation to the Sood Foundation, the amount which she took from her 5 monthly pensions of ₹15,000 for the use COVID-19 relief measures.

"Really proud to announce that Boddu Naga Lakshmi, the blind girl who donated her 5-month pension of Rs 15000 to the Sood Foundation will be inaugurating our oxygen plant in Andhra on July 23 at 11:15 am (sic)," the multi-lingual actor wrote on Twitter. His gesture has received accolades from the netizens.

Really proud to announce that Buda Nagalakshmi, the blind girl who donated her 5-month pension of Rs 15000 to @SoodFoundation will be inaugurating our oxygen plant in Andhra on July 23 at 11:15 am.
Sri Goutham Reddy, Minister IT
Sri Chakradhar Babu,DC will be present.
Jai Hind🇮🇳 pic.twitter.com/oJ9Z6b6kVh

One of the users wrote, “She is really great, if everyone had a beautiful kind heart like her I think this world would be filled with happiness & kindness.” Another user praised the actor’s decision and wrote, “Inspiring lady hats off to you.” A third user chimed in and wrote, “Real hero of India Sonu Sood sir.” Another user echoed similar sentiments and wrote, “Your work for the society for numerous no. of miserable will act as a source of inspiration for many others.”

She is really great ,if everyone had beautiful kind heart like her i think this world would be filled with happiness & kindness. Really salute to her ❤️❤️❤️❤️🙏🏻🥰🥰🥰🥰🥰

Inspiring lady hats off to you

In May, Sood had announced that the first set of oxygen plants being set up by the foundation will come up at Government Hospital, Kurnool and District Hospital, Atmakur, Nellore in Andhra Pradesh. Sood Foundation is in the process of setting up more plants in the needy States as part of its initiative to support rural India in its battle against the pandemic. He will soon set up the other oxygen plants across states like Tamil Nadu, Karnataka, Punjab, Uttarakhand, Telangana, Maharashtra, Rajasthan, Uttar Pradesh, Bihar, Madhya Pradesh, and many others. These 18 oxygen plants will cater to almost 5,500 beds. Speaking about the initiative, Sonu had said in a statement, "In the last few months we have seen that the biggest problem that we all have faced is oxygen and the unavailability of it. My team and I thought about what we should do to eradicate this oxygen problem from its roots. So, we decided that we should set up entire oxygen plants in as many places as possible."

READ | Sonu Sood’s fan cycles 1200 km to meet him in Mumbai, dedicates a song
READ | Sonu Sood gets emotional on mother's birth anniversary, promises to 'give his best always'